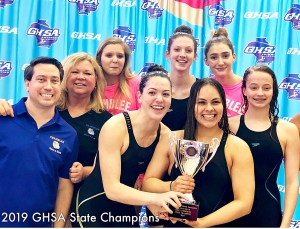 The victory was the program’s first ever state swim title, DeKalb’s 18th girls’ swim championship and first DeKalb state swim title since 1987. The win also brings DeKalb County’s title count to 315 including all sports since 1938’s literary title and the first athletic title by Clarkston in boys’ basketball in 1940.

Chamblee opened the meet by winning the 200-medley relay for the second time in three years with a time of 1:45.94 (new team record) produced by the team of Kyla Maloney, Jade Foelske, Teresa Maloney and Sophie Bell. Foelske and Teresa Maloney were both part of the gold medal win in 2017 as the Lady Bulldogs finished runner-up at state.

Senior Jade Foelske was the catalyst for Chamblee swimming All-American times on the way to her fifth and sixth individual state gold medals. She won gold in the 100-yard butterfly for the fourth consecutive season with a time 53.81 and captured the gold for the second consecutive season in the 200-yard individual medley (2:00.22), both times were team records. 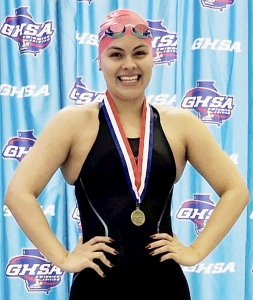 Foelske’s six state gold medals ties her with former Chamblee great Heidi Jachthuber (1974-76) for the second most girls’ state medals. Four DeKalb girls’ swimmers are tied for the most with seven all from the 1960s and 1970s.

Freshman Kyla Maloney set a team record in swimming to the silver medal in the 100-yard backstroke with a time of 55.91.

Chamblee put the title away with a strong silver medal finish in the 400-yard freestyle relay with a time of 3:34.31 by Foelske, Anna Blankenship, Teresa Maloney and Kyla Maloney. Foelske got the team off to a quick start swimming a school record time 52.08 in the 100-yard first leg.

The Lady Bulldogs under the direction of coaches Lorri Reynolds and Greg Valley had finished in the Top 10 at state four consecutive seasons entering this year’s state meet. Chamblee was fourth in 2015, fifth in 2016, runner-up in 2017 and eighth a year ago.

Dunwoody won the last three titles on the girls’ side taking the crown in 1985, 1986 and 1987 to tie Lakeside for six state titles. 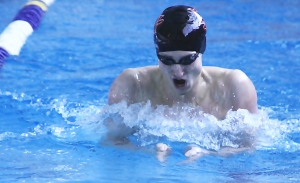 Druid Hills Liam Bell doubled up on gold medals with wins in the 200 indvidual medley and 100 breaststroke. His 100 breaststroke time of 53.83 set a new state record. (Photo by Mark Brock)

Chamblee finished seventh overall in the boys’ standings for their 16th Top 10 finish and seventh consecutive dating back to 2013 as they put together 189 points.

The 400-yard freestyle relay team of Will Decker, Trocchi, Cardot and Hardy added 38 points to the team total by taking fourth in the event (3:13.88).

Druid Hills was propelled to an 11th place finish in the boys’ Class 4-5A by a pair of gold medal wins and state record performance from senior Liam Bell.

See the full DCSD state swim meet results at the link below: