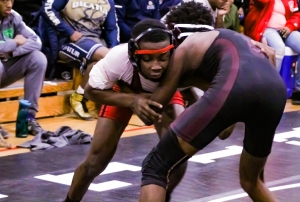 Stone Mountain’s DeeJay McNeal (left) is undefeated heading into the Class 3A State Wrestling Tournament. He and teammate Antonio Mills are the only two undefeated out of the DeKalb contingent. (Photo by Mark Brock)

DeKalb County has sent 62 state qualifiers to the 2019 GHSA Traditional Wrestling State Tournament this week along with five alternates that could see action as the tournament got underway last night and goes through Saturday.

The GHSA is also holding a girls’ championship this year and DeKalb has eight qualifiers competing with one alternate making the trip.

The boys’ championships in Classes 7A, 6A, 5A and 4A got underway late on Wednesday and included 52 of the DeKalb qualifiers.

The biggest contingent is in Class 5A with 25 boys traveling to take on the state’s best. Southwest DeKalb leads the way with 8 followed by Arabia Mountain (6), Columbia (5), Clarkston (3) and Miller Grove (3).

Lakeside has two competitors and two alternates in 7A and Class 6A is led by Dunwoody (7), Stephenson (4), Tucker (2) and Martin Luther King Jr. (1).

Classes 3A and 2A were to get underway today led by Stone Mountain (5) and Redan (1) in Class 3A and McNair with 5 in Class 2A.

See full list of state qualifiers at link below: