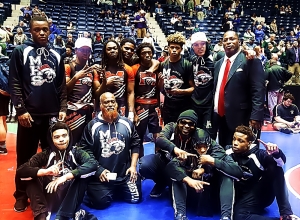 The Mustangs won their second county championship in 2018 262.5 to 192 over the Southwest DeKalb Panthers to end a two-year reign by the Dunwoody Wildcats. The championship round is set for 3:00 pm on Saturday at Druid Hills High School.

The tournament which started in 1962 with a tie between Briarcliff and Avondale is one of the longest running events in DeKalb County athletics.

Redan has won the title eight times with the last coming in 2006 to lead the way among the county competitors followed by Columbia with 7 (last in 2003), Chamblee 6 (last in 1981) and the now closed Briarcliff won 6 consecutive titles from 1962 to 1967.

Columbia won five consecutive titles from 1999 to 2003 for the second longest win streak behind Briarcliff.

Six teams hold titles in the past 10 years led by Marist with three followed by McNair and Dunwoody with two each. Dunwoody won its first title in 2016 and made it back-to-back championships with a win in 2017.