The diving competition begins at 5:00 pm today at the Chamblee High School pool and returns both the girls’ and boys’ 2018 champs in Lakeside senior Sam Witcher and Dunwoody junior Lauren Davis.

Witcher set a county record point total of 545.65 a year ago and will battler runner-up senior Max Stephens of Chamblee and bronze medal winner sophomore Andrew Stowe of Chamblee.

Davis also set the girls’ county mark for diving with 466.65 and went on to claim a silver medal in the state meet.

Lakeside was the runner-up a year ago and are led by senior Gavin Wheeler and sophomores Kamal Muhammad and Zachary Zhao. Wheeler claimed the titles in the 200 individual medley and 100 100 breast stroke (5th at state). Muhammad won gold in the 100 backstroke (5th in 100 butterfly at state) and Zhao won the 500 freestyle gold.

Junior Grant Allison leads Dunwoody into the 2019 meet as the reigning champ in the 50 freestyle and 100 freestyle. He was third in the state in both events.

Druid Hills senior Liam Bell is a big threat in the 200 individual medley and 100 breaststroke having won the titles in both 2016 and 2017. 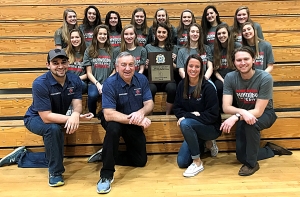 Dunwoody is the four-time defending county champions on the girls’ side with sophomore Ashley Allen and junior Avery Altera joining state silver medalist Davis in leading the charge to defend the title.

Altera won the county title in the 200 freestyle (4th at state) and was second in the 100 butterfly (5th at state). Maxwell was the country runner-up to record setting teammate Davis in the diving competition.

The Chamblee Lady Bulldogs are looking to win the title for the second time and first in over 30 years led by four-time state champion senior Jade Foelske.

The swimming finals begin at 3:00 pm on Saturday at the Chamblee High School pool.