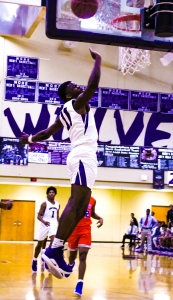 Zyair Greene’s second half performance propelled the Miller Grove Wolverines to a 62-51 Region 5-5A boys’ basketball win over Columbia. (Photo by Mark Brock)

Zyair Greene scored 17 of his 24 points in the second half to help the Miller Grove Wolverines pull away from the Columbia Eagles for big 62-51 Region 5-5A boys’ basketball game at Miller Grove Friday night.

The Wolverines (9-15, 5-6) were tied for fourth place with Chamblee and Arabia Mountain going into the night’s action and were hoping to move up with the win. Miller Grove remains in a tie with Chamblee at 5-6 in the region as the Bulldogs defeated Clarkston, but Arabia Mountain fell a game back with a loss at the hands of No. 4 Lithonia.

Miller Grove and Columbia had eight lead changes in the first half as the Eagles rebounding edge of 17-8 created some opportunities. The Wolverines took a 25-25 lead into the half on a steal and layup by Tyreik Boyd as the clock ticked below 20 seconds.

Columbia scored the first basket of the second half on a put back by Ahmeen Stackhouse, but Boyd answered with a three-pointer and the Wolverines never trailed again.

Greene hit a pair of three-pointers and was two-of-two at the free-throw line in the third quarter as Miller Grove increased its lead to six at 42-36 at the end of the third period.

Two early fourth quarter buckets by Greene and would finish with nine points as the Wolverines led by as much as 13 points twice including 56-43 with 1:58 to play.

Miller Grove doubled its first half rebounding with 16 and did not commit a second half turnover until the 5:41 mark of the fourth quarter and finished with just seven on the night.

Greene led the Wolverines with his game-high tying 24 points followed by Boyd with 15 and Jahmil Barber chipped in 10 points and grabbed 7 rebounds.

Devin Longstreet tied Greene for the game-high with 24 points on the night and LJ Thomas contributed 11. 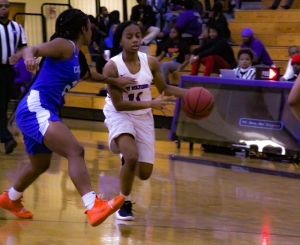 Columbia’s win was its 13th in 15 outings since a November 30th loss to Southwest DeKalb and over a Miller Grove team that had won four of its last six to close within one game of .500 on the season.

Maya Berry had 12 of her 20 points in the first half, including eight consecutive points to open the second quarter, as Miller Grove (10-12, 4-7) opened the big 30-17 halftime lead.

Columbia came out of the break forced two quick turnovers that led to layup by Constance Thomas and a three-pointer from the top of the key by India Terrell. Thomas’ drive with 2:46 left in the third cut the lead to 32-30 with the 13-2 run.

Berry pushed Miller Grove out to a 35-30 advantage on a pair of free throws with 56 seconds left, but two more turnovers proved costly for the Lady Wolverines as Terrell got an easy basket and Shontrice Austin hit a three-pointer at the buzzer to knot the game at 35.

Columbia took its first lead since the 5:49 mark of the first quarter as Austin got an offensive rebound and score to start the fourth period.

Miller Grove regained the lead at 40-39 with 6:14 to play, but Columbia’s Daija Carr completed an old fashioned three-point that put Columbia ahead for good at 42-40 with 5:16 remaining.

Carr would score six more points on four-of-five from the free-throw line and a nice basket after Thomas blocked a shot and grabbed the rebound on the defensive before getting the ball up the court to Carr to make it a 50-42 advantage with 1:54 to play.

Columbia (16-5, 7-3) had four players reach double digits in scoring led by Daija Carr with 14, Shontrice Austin 13, Constance Thomas 12 and India Terrell 11. Austin added 10 rebounds for a double-double and Aleyah Maddox pulled down 12 rebounds in the game.

Berry led the way for Columbia with a 20-point, 11-rebound double-double and Marguerite McGill also completed a double-double of 10 points and 11 rebounds.