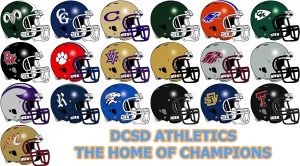 The 2017 DCSD high school football season is just around the corner with most teams getting in their openers the weekend of August 18-19.

Sixteen of the DCSD football programs are playing preseason scrimmages.

The first two scrimmages are coming up on Friday and Saturday of this week.

Southwest DeKalb under the direction of new head coach Damien Wimes opens the scrimmage season traveling to Salem (Conyers) for a 7:00 pm matchup on Friday, August 4. The Panthers are coming off Class 5A state playoff first round appearance last fall.

Redan versus Martin Luther King Jr. tops the list of Saturday, August 12 scrimmages as the pair kickoff at 6:00 pm at Buck Godfrey Stadium.

Chamblee travels to Atlanta to face Washington in an early 11:00 am kickoff for their scrimmage on Saturday.

Thirteen DCSD football teams play their season openers on Friday, August 18 while four more kickoff the season on Saturday, August 19. Cross Keys and McNair are the only teams to not open on the first weekend of play.

See link below for the full 2017 scrimmage schedule: