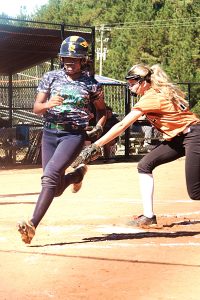 Arabia Mountain’s Dyamond Brown beats the play at the plate. The Lady Rams want to improve on their school record of 21 wins and a second round playoff appearance from a year ago. (Photo by Mark Brock)

Fast-pitch softball season gets underway on Tuesday (Aug. 8) with seven teams from DeKalb County Schools (DCSD) throwing the first pitch of the season.

DCSD put seven teams into the state playoffs a year ago including Arabia Mountain (5A), Miller Grove (5A), Chamblee (5A), Southwest DeKalb (5A), Lakeside (7A), Stephenson (6A) and Cedar Grove (3A).

Arabia Mountain set new school records with 21 wins (21-9) and their first best-of-three playoff series win over Kell. The Lady Rams were also the first DCSD team to win a best-of-three series since it was instituted by GHSA in 2009.

McNair visits Stephenson at 5:00 pm to be the first DCSD teams to get started. Stephenson is coming off a 16-9 record in 2016 in which the Lady Jaguars finished as the Region 4-6A runners-up and reached the Class 6A state playoffs.

Chamblee hosts North Springs in a 5:30 pm game at Chamblee. The Lady Bulldogs made their seventh consecutive trip to the state playoffs last season as the No. 3 seed out of Region 5-5A finishing with a record of 16-11.

Dunwoody opens the season with a Region 7-6A tussle with John’s Creek at 5:30 pm. The Lady Wildcats came up one win short of making the playoffs a year ago out of the tough 7-6A.

Miller Grove was 15-4 and the No. 2 seed out of Region 5-5A last season with a return to the state playoffs after a tough 2015 season. The Lady Wolverines travel to South Gwinnett for a 5:55 pm opener.

Druid Hills hosts Washington at 5:30 pm while Tucker travels to Mundy’s Mill for a Region 4-6A battle to round out the opening day for DCSD.

(See links below for 2017 softball schedules)