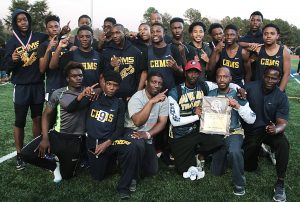 The Panthers held off a late charge by Chamblee Middle to win the tight points standings with the slimmest of margins of one point, 92-91. It was the second time the trophy was determined by one point as Cedar Grove upended Chapel Hill 75-74 in 2013.

The Panthers advanced to the Trail to the Title football semifinals to get the year off to a good start. The girls’ basketball team finished 16-1 overall and third in the county championships with a win over Chamblee that would prove to be the difference maker in the final All-Sports Award standings.

Chamblee rallied to within one point (92-91) of Chapel Hill after trailing in the standings by five points following basketball season. A county basketball championship by the boys and a fourth place finish by the girls’ basketball team had Chamblee in the running. 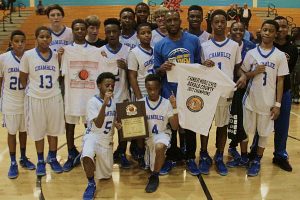 The two schools split the county track titles with Chapel Hill winning the boys’ title and Chamblee the girls’ championship. The Chamblee boys’ track team finished fourth to garner 17 points, but it was not enough as the Lady Panthers picked up 13 points with an eight place finish to clinch the one-point win for the trophy.

Champion, the 2016 All-Sports Award winner, finished third, 13 points behind Chapel Hill with 79 points, while the 2016 runner-up, Stephenson, was fourth with 75 points. Miller Grove rounded out the Top 5 with 71 points moving up four spots from a ninth place finish in 2016.

Chapel Hill won the inaugural award in 2008 and won again in 2014 against Cedar Grove which had won the 2013 title by one point.

Chamblee finished second for the third time in the 10-year history of the award with previous runner-up finishes in 2008 and 2010 to go with a pair of third place finishes in 2009 and 2016.