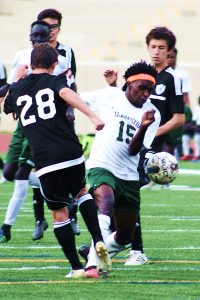 Clarkston’s Mohamed Tambadu (15) battles through traffic on the way to a goal. Tambadu has put together back-to-back hat tricks in the state playoffs. (Photo by Mark Brock)

Clarkston and Druid Hills both won tight state playoff soccer contests to carry the DeKalb banner into the Elite 8 in their respective classifications.

The Angoras led 2-0 at the half thanks to Tambadu. He wasted little time in getting his first goal as he hit a crossing shot from the right side into the left corner of the net to make it 1-0 with just 2:11 having run off the clock.

Clarkston headed into the locker room up 2-0 as Jerome Luoma found Tambadu with a nice pass he turned into the second goal.

Starr’s Mill would then tie the game at the 11:28 mark as the momentum had switched sides.

Tambadu was not having any part of a loss for the Angoras as he answered the challenge just 32 seconds later giving Clarkston a 3-2 lead as he charged the goal and scored.

Luoma converted a penalty kick with 3:07 to play to give the Angoras an insurance goal up 4-2.

Starr’s Mill scored with 1:15 to play trimming the lead to one (4-3). Clarkston was able to keep Starr’s Mill away from any scoring opportunities as the clock ticked down to 0:00.

The Indians led 2-1 at the half and rallied from 3-2 to send the game into overtime tied at 4-4. Neither team scored in overtime and moved on to the penalty kick session.

McIntosh pulled out a 3-2 win in penalty kicks to advance.

Class 4A
It was the night for tight games for DeKalb in the Elite as the Druid Hills Red Devils scored with just over a minute to play to pull out a 2-1 win over Northwest Whitfield on Friday night.

The No. 2 ranked Red Devils (14-6-0) got out in front of No. 9 Northwest Whitfield 1-0 on a goal by Menkaseh Tokpa on an assist from Hasib Fudaeel.

Northwest Whitfield knotted the game at 1-1 and the teams remained tied as the clock ticked down below the two minute mark.

Luke Narker broke the tie with his goal on Fudaeel’s second assist of the night with just 1:30 to play. Druid Hills held on for the tough win.

Druid Hills plays host to the Class 4A boys’ Elite 8 round as No. 8 Cartersville invades Adams Stadium on Saturday at 7:30 pm in another Top 10 battle for Druid Hills. 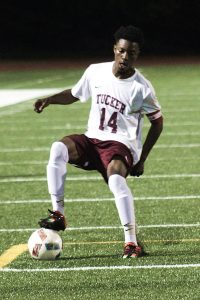 Region 4-6A champions Tucker Tigers had their playoff run derailed in a 5-1 defeat at the hands of No. 4 ranked Allatoona.

Tucker (12-8-0) controlled most of the first half, but missed opportunities and the play of Allatoona’s goalie proved to be the Tigers’ downfall.

The big point was a penalty kick by the Tigers that appeared to set the Tigers up to take the early lead was blocked by the Allatoona goalie.

The momentum begin to change in favor of Allatoona (16-3-0) and a steal and picture perfect pass gave Allatoona the lead at 1-0 with 8:48 left in the first half.

Twenty-three seconds later Allatoona struck again to go up 2-0. A Tucker opportunity to cut the lead to 2-1 before the half was deflected and just missed going into the corner of the goal with 4:35 to play in the half.

Allatoona’s goalie would make two more big saves on point blank shots by the Tigers in the final 2:51 to secure the 2-0 lead at the break.

Allatoona scored three more goals in the first 13 minutes of the second half to build a 5-0 lead the Tigers could not dig their way out of to prolong their season.

Freshman Kyle Wright finally got Tucker on the scoreboard with 25:31 to play, but the Tigers could not muster any more goals.