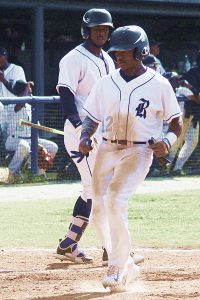 Redan’s Latrell Wyatt (12) crosses the plate in first round win over Fannin County. Wyatt and his teammates swept Crisp County in second round play of the Class 3A state baseball playoffs. (Photo by Mark Brock)

A two-game sweep of Crisp County on Wednesday at Redan moved the Raiders into the Class 3A Elite 8 round of the state baseball playoffs for the first time since 2013’s run to the state title.

Redan responded with seven runs of its own in the bottom of the inning to take a 7-4 lead on the way to the 12-5 Game 1 victory.

The nightcap went 15-4 in favor of the Raiders behind a big grand slam from catcher Orlando Adams.

Redan is awaiting the winner of the Pike County/Coahulla Creek series which is tied at 1-1 and headed to the deciding third game. A coin flip would decide the home team if Pike County, also a No. 1 seed, is the victor. A series victory by Coahulla Creek gives Redan the home field advantage.

The three-game series is scheduled for Wednesday, May 10 (doubleheader) and Thursday, May 11 (single game, if necessary).

Class 5A
For the second playoff series in a row the Arabia Mountain Rams lost the series opener only to bounce back for a win in the nightcap to force a third game against the McIntosh Chiefs.

With their backs against the wall, the Rams responded with a 7-5 victory in the nightcap to force the nightcap.

The pair are scheduled for a 5:00 pm start tonight (Thursday, May 4) depending on the rain. A rainout would move the game to Friday. 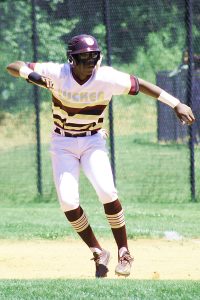 Tucker’s Jalen Sewell gets a lead after drawing a walk. He would later have an RBI double in the 10-3 loss to River Ridge. (Photo by Mark Brock)

A two-game sweep at the hands of the River Ridge Knights brought an end to the Tucker Tigers amazing 22-game win streak and their season in the second round of the Class 6A state playoffs at Tucker on Wednesday.

River Ridge (27-7) went deep four times to jump out to a 6-0 lead in the first four innings on the way to a 10-3 opening game victory. Bowling got the homer parade started with a two-run shot to left-center field in the first inning to make it 2-0.

Anderson’s solo shot in the second and Chatam’s solo homer to lead off the fourth inning made it 4-0. Blabqugh added a towering, two-run shot into the trees in center field to finish off the fourth with the Knights up 6-0.

River Ridge upped the lead to 10-0 with two runs in the fifth and two more in the sixth.

During this time the Tigers would leave three runners in scoring position and hit into a pair of double plays to kill rallies.

Tucker finally got on the scoreboard in the bottom of the sixth inning on back-to-back RBI doubles by Emory Willis and Jalen Sewell. Sewell would late score on a throwing error by the catcher to make the final of 10-3.

The Tigers (26-8) continued to have trouble scoring runs in the second game as River Ridge closed out the series with a 10-0 victory.

Thursday, May 4
CLASS 5A
McIntosh at Arabia Mountain, if necessary, at 5:00 p.m.
Depending on rain, will move to Friday