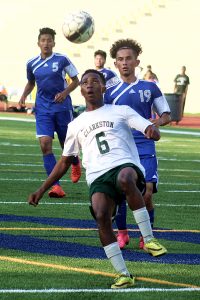 Clarkston’s Bosco Hakuzimna (6) had an assist during the Angoras’ 2-0 Class 5A quarterfinal win over Decatur on Saturday. (Photo by Mark Brock)

Great defense and opportunistic scoring propelled both Clarkston and Druid Hills to shutout victories in the Elite 8 round of the boys’ state soccer playoffs on Saturday.

The No. 2 ranked Angoras scored two early goals and behind the outstanding defensive play in front of goalie Bismark Dansou cruised to a 2-0 victory over the No. 8 ranked Decatur Bulldogs (10-5-5) in Class 5A playoff action at Hallford Stadium.

Clarkston’s defense played so well that goalie Bismark Dansou only had two saves in the game as his teammates limited the Bulldogs shots on goal.

Jeremiah Luoma scored just six minutes into the game on an assist by Lionel Touroudo to give the Angoras (18-1-1) an early 1-0 advantage.

Luoma struck like lightening just one minute later as Bosco Hakuzimana found the sophomore forward for the 2-0 lead that was all Dansou and the defense would need to send the Angoras into the Class 5A semifinals.

This will be Clarkston’s first semifinal appearance since the 1990 season when they lost 4-1 to Shiloh. The Angoras would claim third place overall with a 3-0 win over fellow DeKalb rival Redan in the consolation game. 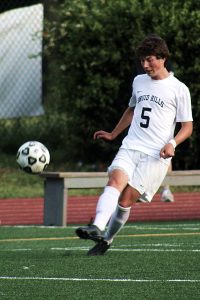 Druid Hills’ Connor Logue (5) scored one of the Red Devils’ 4 goals in the 4-0 win over Cartersville on Saturday in the Class 4A state quarterfinals. (Photo by Mark Brock)

The No. 3 ranked Druid Hills Red Devils fell one spot in the polls this week despite an impressive 4-0 victory over No. 8 ranked Cartersville in the quarterfinals of the Class 4A boys’ soccer state playoffs on Saturday at Adams Stadium.

Behind the direction of center backs Matt Overstreet and Will Johnson the Druid Hills defense helped goalie Josh Lloyd record his 11th shutout on the season.

Lloyd played all 80 minutes and turned away six shots on goal in the shutout win.

Menkaseh Tokpa keyed the Red Devils’ offense using his passing to set up the first two goals of the game. Tokpa found Luke Narker for the opening goal, Narker’s 14th on the season, to put Druid Hills up 1-0.

Tokpa hit another nice pass to Hasib Fudacel as the lead increased to 2-0.

Fudacel connected later on a free kick to push the Red Devils in front at 3-0. The goal gave Fudacel his 13th on the year.

The final goal would come on another free kick, this one off the foot of Connor Logue, to make the final of 4-0. It was Logue’s sixth goal on the season to go with 10 assists.