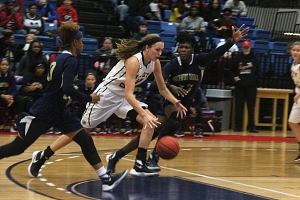 The No. 1 ranked Southwest DeKalb Lady Panthers rallied twice against Sequoyah to pick up their fourth state title game berth in five years with a 55-47 victory at Columbus State on Saturday night.

Peyton Satterfield’s free throw with 2:48 to play in the game gave Sequoyah (26-6) a 39-38 lead and Southwest DeKalb (27-5) trailed for the first time since early in the third quarter.

Daisa Alexander got a put back off her offensive rebound that kicked off a 9-0 run by the Lady Panthers to take control of the game. Jada Walton had a drive to the basket for another score and Cori Bostic pulled down an offensive rebound and stuck it back in as the Southwest lead grew to 44-39 with 1:46 to play.

Alexander capped the run with an old fashioned three-point after being fouled on a layup off an inbounds pass from Chantz Cherry with 1:06 to play to push the advantage to 47-39.

Sequoyah went to foul mode to slow down the clock and Cherry would hit five of her six from the charity stripe in the final 55 seconds and Alexander was 1 of 2 and had a steal for an easy basket to help Southwest close out the win.

Sequoyah had jumped on Southwest DeKalb last in the first quarter and early second quarter behind four points each from sisters Lauren Hartman (last 2 of 1st quarter and 2 to start 2nd) and Kelley Hartman (next 4) that gave their team a 15-4 and forced a timeout by the Lady Panthers.

Walton would come out of the timeout to hit a three-pointer and would score three more to fuel a 10-3 run to end the half and pull Southwest DeKalb to within 18-14.

Raven Thurman would have five points in a 10-0 run to open the third quarter that would give the Lady Panthers a 24-18 advantage on Walton’s basket with 5:42 left in the third period.

Alysa Cagle would help Sequoyah rally to tie the game twice with six points on drives to the basket, including the game tying pull up with 5:17 to play to knot the game at 38-38 just before Satterfield’s free throw.

Alexander would finish with 27 points on the night to follow up her 30 point effort the night before against Columbus. Walton would add 14 for Southwest DeKalb.

Kelley Hartman finished with 12 points and 17 rebounds to lead Sequoyah.

Southwest DeKalb makes the trip to Macon for the Class 5A state championship on Friday (March 4) to take on Winder-Barrow (26-6), a 65-52 winner over Brunswick in the other semifinal game on Saturday at Columbus.