Miller Grove Slams No. 3 McIntosh 72-52 for Return to Class 5A Title Game 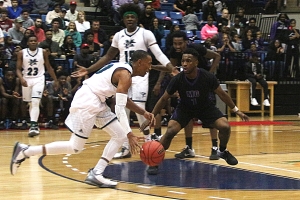 Miller Grove’s Aaron Augustin (1) defends against McIntosh’s Will Washington during the Wolverines 72-52 Class 5A semifinal win. (Photo by Mark Brock)

The No. 1 ranked Miller Grove Wolverines responded to McIntosh’s fans chants of “overrated” by rolling to a 72-52 win over the No. 3 team in Class 5A at Columbus State on Saturday night.

Trailing 27-26 with 3:24 to play in the first half after McIntosh’s Will Washington’s drive to the basket, the Wolverines answered the chants with a 12-4 run to finish the half to take control at 38-31.

Aidan Saunders calmly stripped the net with a trey from the right wing that would give Miller Grove (29-2) the lead for good at 29-27 with 3:16 to play in the first half. Alterique Gilbert who was earlier taunted at the free-throw line by the “overrated” chants brought the Wolverine fans to their feet with a steal and a double-pump reverse dunk.

Raylon Richardson finished the half with seven consecutive points for Miller Grove as the Wolverines took a 38-31 lead into the half.

Isaac Kellum and Jordan Lyons scored quickly to open the second half to pull McIntosh within 38-35, but would get no closer the rest of the way.

Miller Grove’s Aaron Augustin struck next with a three-pointer from the left wing and a layup both coming on assists from Gilbert and when Gilbert hit a jumper from 18 feet out with 42 seconds left in the period to send Miller Grove into the fourth quarter up 53-42.

The Wolverines would continue to extend the lead opening the final quarter with a 9-0 run started by Gilbert’s drive for a basket and both Augustin and Richardson hitting three of four free throws to make it a 61-42 lead with 4:34 remaining in the game.

Gilbert, the McDonald’s and Jordan Brand All-American, finished the game with 21 points and 11 rebounds while Richardson, an UAB football signee, put up 17 points and 12 rebounds and Augustin would add 16 points for Miller Grove.

The Wolverines advanced to the Class 5A state championship game and are making their seventh state title game in eight years. They take on No. 2 ranked and undefeated Allatoona (31-0), a 48-46 winner over No. 4 Cedar Shoals on Saturday at Columbus, at 8:45 pm on Friday (March 4) at the Centreplex in Macon.

Class 4A Boys
Liberty Co. 81, Lithonia 68
Lithonia senior Tyheem Freeman hit for 24 points, but it was not enough to help the Bulldogs get past No. 2 ranked Liberty County in an 81-68 Class 4A semifinals loss at Fort Valley State University on Saturday.

Liberty County got 33 points from Davion Mitchell and Richard LaCounte added 19 points in a game Liberty ran out to a 16-0 lead.

Jacara Cross added 16 and Rodney Chatman 12 for Lithonia which finished its season ranked No. 4 and with its second consecutive season of 25 or more wins at 25-6.

Class 3A Boys
Jenkins 68, Cedar Grove 59
The No. 8 Cedar Grove Saints battled back from a 35-20 halftime deficit before coming up short against defending Class 3A state champion and No. 5 ranked Jenkins in a 68-59 loss in the Class 3A semifinals at Augusta University on Saturday night.

The Saints put together a solid third quarter to climb back into the game against Jenkins by closing to within 49-40 with a 20 point offensive output.

Makale Carte (19 points), Antonio Reeves (18 points) and Devon Barnes (10 points) led the second half charge for Cedar Grove. The trio helped the Saints pull within 62-59 with 3:20 to play before Jenkins halted the run with a 6-0 run to close out the game for the win.

Cedar Grove finished the season 21-8 and had won 11 consecutive games before falling to Jenkins.