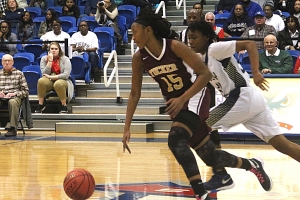 Tucker’s Bria Bass (15) races up court against Douglas Co. The Lady Tigers won and advanced to the Class 6A Championship in Macon. (Photo by Mark Brock)

A 15-4 run late in the third quarter and early fourth quarter was big for the No. 5 Tucker Lady Tigers as they defeated No. 6 Douglas County 79-66 in the Class 6A semifinals on Saturday at West Georgia to advance to next week’s championship game in Macon.

Douglas County’s Amira Atwater capped a 9-2 third quarter run for her team with a pull up jumper from 15 feet to cut what was once an 11 point lead to just five (50-45) with 3:05 left in the third quarter.

Kierra Johnson-Graham answered for Tucker with a pair of buckets, including a drive and taking a jump pass from Mariya Trimble, to get the 15-4 run started for the Lady Tigers (27-4).

Jayla Morrow who had hit for 20 points in Tucker’s quarterfinal win over Woodstock on Thursday night at West Georgia then nailed back-to-back three-pointers and Chiqueria Cook added a pair of free throws to end the third quarter with Tucker up 62-49.

Douglas County (26-2) cut the lead to 11 twice in the fourth quarter, but Tucker’s Najila Shamsid-Deen would hit 5-6 from the free-throw line and Bass would hit two to seal the Tucker victory.

Bass had 15 points in the first half, including a three to open the game to lead Tucker to a 41-32 lead at the half.

Johnson-Graham drove the length of the floor and put in a basket with 12 seconds remaining for the 9 point half time lead.

It was Douglas County’s second loss of the season, both coming at the hands of Tucker in semifinal tournament action in the Peach Classic and now the Class 6A state semifinals.

Joining Bass (19) in double figures for Tucker were Johnson-Graham with 16 points and 11 rebounds, Shamsid-Deen with 17 and Morrow with 12.

Amari Robinson had 20 points to lead Douglas County and was joined in double figures by Arsula Clark with 19 and Atwater with 15.

Tucker advances to its second state title game in three seasons having won the 2014 Class 5A championship. The Lady Tigers match up with No. 3 ranked McEachern (24-7) which defeated West Forsyth 81-70 to advance. The two tip off at 7:00 pm on Saturday (March 5) at the Centreplex in Macon.