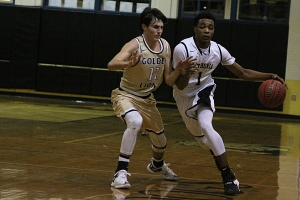 Lithonia’s Rodney Chatman (1) drives against St. Pius’ Christian Merrill (11) during the key Region 6-4A battle between No. 2 Lithonia and No. 3 St. Pius. (Photo by Mark Brock)

Seniors Rodney Chatman and Tyheem Freeman made senior night a great memory for the No. 2 ranked Lithonia Bulldogs as they powered their team to a 56-48 win over No. 3 ranked the St. Pius Golden Lions in a big Region 6-4A boys’ basketball game at Lithonia.

The two teams were tied six times in the back-and-forth first half before Lithonia (18-4, 15-1) took the lead for good on a pair of Tylan Patterson free throws with 28 seconds to play in the first half for a 24-22 Bulldog lead. Chatman played a big role in the first half scoring 11 of his game-high 22 points, including a clutch three-pointer at the end of the first quarter to knot the game at 14-14 just before the buzzer. 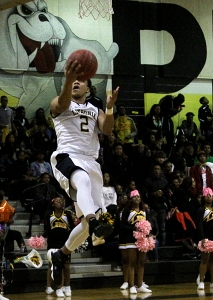 Lithonia’s Tyheem Freeman goes in for an easy bucket against St. Pius. (Photo by Mark Brock)

Freeman who had five first half points opened the second half on fire scoring all seven points in a 7-1 Bulldogs’ run to open the second half and push the lead to 31-23 with 5:21 left in the third quarter.

Christian Merrill’s steal and basket trimmed the lead back to 31-25, but back-to-back dunks by Lithonia’s Jacara Cross on nice assists by Chatman and Freeman that gave the Bulldogs momentum as the home crowd came to their feet.

Chatman’s three from the left wing on an assist from Freeman made it 38-28 with 1:54 left in the period and the Bulldogs took a solid nine-point lead (38-29) into the final quarter.

Chatman was fouled on a drive to the basket and calmly sank two free throws and then followed with a three-pointer on the next trip down the floor to push the lead back out to 10 at 46-36 with 4:52 to play.

Freeman struck again as he took a pass from Robert Hatchett and stroked a trey from the right wing that gave the Bulldogs a 12-point cushion with 3:05 to play.

It would be the Bulldogs last basket from the floor the rest of the way as Patterson’s two free throws with 1:44 to play started Lithonia on a march to the free-throw line to hit 7 of 10 and keep the Lions at bay.

St. Pius’ Sam Petry would hit three three-pointers in the final 1:02 of the game, but it was too little too late as the Bulldogs held on for the key Region 6-4A victory to keep their place atop the region standings.

Chatman’s 22 points led all scorers and Freeman added 18 for the No. 2 ranked Bulldogs. Kerny Lane was the only Golden Lion in double figures as he hit for 19 points. 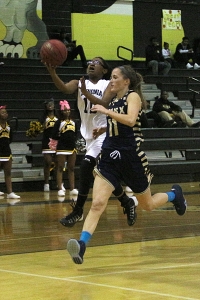 Girls: St. Pius 71, Lithonia 33
The St. Pius Lad y Golden Lions jumped to a 19-0 lead and rolled to a 71-33 Region 6-4A victory over the home standing Lithonia Lady Bulldogs on Friday night.

Leah Middleton scored seven of her nine points for the game in the 19-0 run to start the opening period. Mai Vy Madden added five points in the run including a three-pointer that made it 8-0 with 4:26 left in the quarter.

Alexandra Smith’s drive to the basket with 1:00 to play in the first quarter ended the run. Kalyn Geer’s free throw with 11 seconds left made it 21-3 deficit for Lithonia.

Lithonia opened the second quarter with a 10-4 run led by Geer’s four points and two each from Keyanna Parks, Ashari Anderson and Alana Smith to cut the lead to 12 (25-13) with 2:53 left in the first half.

St. Pius would hit back-to-back threes  and Madden would add a pair of free throws with 5 seconds to play to push the lead back out to 34-16 at the half.

Macey Carson would score five points in the first three minutes of the second half as the lead grew to 39-19. Three consecutive steals by St. Pius, the last by Middleton extended the lead to 26 points (45-19) with 4:32 to play. St. Pius would go on to lead 55-23 heading into the fourth quarter.

Madden and Emma Drash both contributed game-highs with 12 points each to lead St. Pius (14-7) while Carson added 10 points.

Kalyn Geer hit for 11 points to lead Lithonia (1-14 while Ashari Anderson added 8 and Keyanna Parks had 6 points and 9 rebounds.