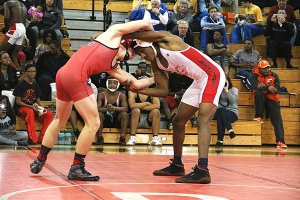 Dunwoody’s Max Tuch (left) pulled out one of the Wildcat’s 7 gold medals in the Area 6-5A Traditional Wrestling Championships. (Photo by Mark Brock)

Area 6-5A and Area 4-3A belongs to DeKalb County as Dunwoody (6-5A) and McNair (4-3A) grappled their way to Area Traditional Wrestling titles over the weekend.

Dunwoody won seven weight class gold medals and 12 medals overall (2 silver, 3 bronze) to win the Area 6-5A title 229-211 over Southwest DeKalb in a repeat finish of the Area Duals.

Southwest DeKalb gave it a run against Dunwoody collecting 12 medals of its own including 3 gold and 9 silver. 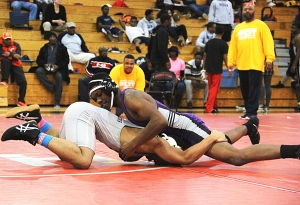 Miller Grove’s Gary Freeman (in purple) followed up his DeKalb Co. gold with an Area 6-5A gold medal. (Photo by Mark Brock)

Miller Grove finished fifth overall, but won six medals (2 gold, 2 silver, 2 bronze). Gary Freeman (152) and Myles Hudgins (195) were the gold medal winners. Freeman was coming off his big win at the DCSD Championships where he was named the Venable Best Wrestler for the tournament.

Area 6-5A qualified 49 DeKalb County wrestlers for the Class 5A State Sectional A set for Lanier High School this Friday/Saturday (2/5-6/16). Dunwoody put 13 wrestlers through while Southwest DeKalb was a close second with 12 followed by Druid Hills (7), Stephenson (7), Miller Grove (6), Clarkston (2) and Martin Luther King Jr. (2).

Area 4-3A
The McNair Mustangs totaled 10 medals to hold off Blessed Trinity 232-225 to earn the Area 4-3A Traditional title over the weekend. 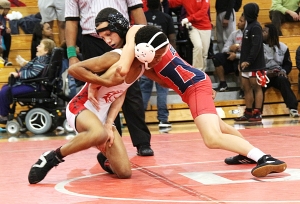 Terreon Hairston (106), Masud As-Siddiq (113) and Muadh As-Siddiq (132) were all gold medal winners for the Mustangs. McNair also had a pair of wrestlers come in fourth to qualify 12 wrestlers for the Class 3A State Sectional B at Calhoun High School Friday/Saturday (2/5-6/16).

Towers put four through to the State Sectional with a fifth place finish that included a pair of bronze medal finishes Melvin Kelly (182) and Maurice Hayes (220). Cedar Grove picked up a bronze medal by Immanuel Coley (170) who also qualified for state to give DeKalb County 17 wrestlers headed the Class 3A Sectional B.

Area 2-6A
The Lakeside Vikings picked up a pair of gold medals and seven total (1 silver, 5 bronze) on the way to a second place finish at the Area 2-6A Traditional Wrestling Tournament. 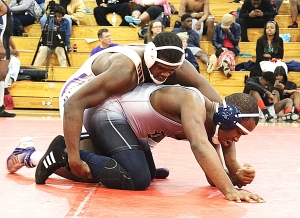 Lakeside’s Kamal Feracho (top) followed up a County Championships gold with an Area 2-6A championship. (Photo by Mark Brock)

County champions Kamal Feracho (195) and Gordon Lewis (285) took gold in their weight classes at the Area Tournament to lead the way for Lakeside.

Spencer Wilson (132) lost just his second match of the season to pick up a silver for the Vikings. The Vikings qualified 10 wrestlers for the Class 6A State Sectional A at Mill Creek High School coming up this Friday/Saturday (2/5-6/16). 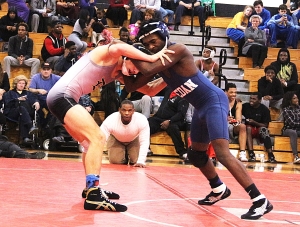 Arabia Mountain’s fourth place finish was paced by Khyree Alexander (138) and Nylan Washington (285) with championship match victories. The Rams picked up 1 silver and three bronze medals along the way.

Lithonia picked up the only other gold medal for DeKalb as Bimysola Attobra (132) captured his title match over Marist’s Grey Bethune.

Thirty-three DeKalb County wrestlers qualified for the Class 4A Sectional A at West Laurens High School this Friday/Saturday (2/5-6/16). Redan led with 10 qualifiers followed by Arabia Mountain with 8, Chamblee and Lithonia 6 each and Columbia 3.