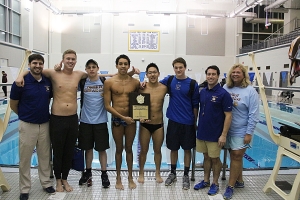 The Bulldogs grabbed nine gold medals and 12 medals overall (2 silver, 1 bronze) in swimming to a 264-216 win over Lakeside to win their fourth consecutive championship and fourth overall. Prior to this four year (2013-2016) run the Bulldogs had finished second nine times, the last coming in 1999.

Dunwoody was third with 179 points and Decatur was the only other team with over 100 points with 137 for fourth.

Chamblee had three swimmers double up on gold medals to account for six of the gold medals brought in by the team. 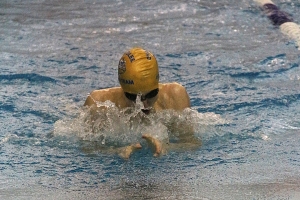 Chamblee’s Liam Bell claimed the DCSD record in the 100 breaststroke (57.60).

Louis Cardot, Liam Bell, Alex Perry  and Theo Hardy put together a gold medal winning time of 1:40.44 in the 200 medley relay to start this year’s event and extend Chamblee’s winning streak in the event to five. 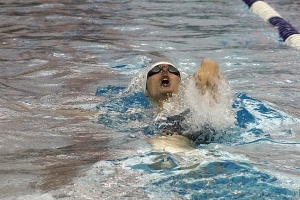 Dunwoody’s Christopher Thames set a new DCSD record of 51.15 in the 100 backstroke.

Dunwoody’s Christopher Thames won his second straight gold medal in the 100 yard backstroke in a record setting time of 51.15. He broke the record of 51.46 set by Tucker’s Cash DeLoach in the 2014 championships.

Lakeside which finished as the runner-up for the fourth consecutive season had a pair of gold medalists in Mark Rotolo in the 100 butterfly (53.65) and Sam Witcher broke a three-year run by Chamblee in the one-meter diving by compiling 368.30 points to take the diving gold medal. Lakeside finished with 11 medals (2 gold, 4 silver, 5 bronze).

The boys’ competition combined for 51 state qualifying times and six diving qualifiers for next week’s GHSA State Swimming and Dive Championships at Westminster. 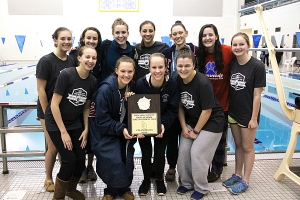 The Dunwoody Lady Wildcats collected eight gold medals and four silver medals on the way to their second consecutive DCSD title and 14th overall by a score of 243-207 over Chamblee. Lakeside was third with 187 and Decatur a close fourth with 183.

Allie Reiter became a five-time individual champion as she swept the 200 individual medley (2:09.94) and 100 breaststroke (1:07.05) for the second consecutive year. She also won the 2014 breaststroke giving her a three-year streak in the event.

Abbey Yates claimed her fourth consecutive DCSD gold medal in the one-meter diving by compiling an impressive 430.90 points for the win. The point total was 45 points better than her best in the prior three years.

Megan Johnson won her first individual gold medal by taking the 500 freestyle crown with a time of 5:40.24. 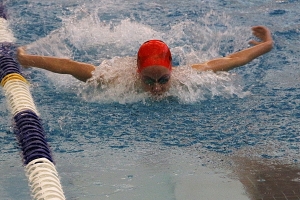 Dunwoody’s Allie Reiter became a five-time DCSD champion with wins in the 200 IM and 100 breaststroke. (Photo by Mark Brock)

Dunwoody swept the 200 medley relay (1:54.22) and 200 freestyle relay (1:43.81) for the second consecutive season. It was the third consecutive win in the 200 freestyle relay and the time set by Laura Spratling, Allie Reiter, Hannah Robison and Kaleigh McGrady (the same team that won the medley relay) was just 1/100th of second of tying the record set by Dunwoody in 2014.

Chamblee which claimed its only DCSD title in 1985 finished second for the 14th time since the 1971 inaugural event for the girls as the team claimed 11 medals (2 gold, 4 silver, 5 bronze).

Decatur’s strong fourth place finish was fueled by the gold medal winning team of Lisa Studstill, Jane Pfeufer, Nadine Abrahamse and Torey Brierley (50 freestyle champ in 2015) in the 400 yard freestyle relay with a time of 3:48.65 to prevent a Dunwoody sweep of the relay events.