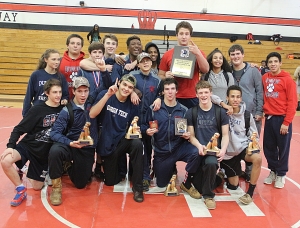 A first time champion was crowned at the 2016 William S. Venable DCSD Wrestling Championships on Tuesday night at Druid Hills High School as the Dunwoody Wildcats won their first crown in the 55th annual wrestling event.

The Wildcats reached seven of the 14 championship matches, won five and had 12 wrestlers place sixth or higher on the night.

The first gold medal of the Championships for Dunwoody came in the 126 pound division as Chris Solo, 3-0 in the tournament, controlled his match from start to finish in a 10-0 victory over third place Southwest DeKalb’s Alfonza Farley (2-1).

The next gold came in a very tight 3-2 victory for Max Tuch over McNair’s Terrance Perdue at 145. Perdue led 2-0 after the first round and Tuch rallied to tie it at 2-2 heading into the final round.

Tuch (4-0) got the final point for the win with 42.3 seconds remaining and prevented Perdue (3-1) from getting the tying or winning points in the final 43 seconds.

Ben Williams was up next for the Wildcats as he took on Redan’s Tirice Cramer in the 160 finale. Trailing 6-2 after having his breath knocked out him Williams began to rally.

It was 6-4 heading into the third round when Williams (4-0) made his move with a pair of nice reversals and escapes to pull out a 10-8 victory for the gold. The match was voted as the Jerun Tillery Best Match of the Championships.

Constantine Gaulas (4-0) picked up the fourth gold for the Wildcats as he held a commanding 9-2 lead in the second round when he pinned Decatur’s Matthew Gilchrist (2-1) with 30.7 seconds left in the round of their 170 championship match.

The final gold medal of the day for Dunwoody in the 195 pound division as the Wildcat’s Darwin Osorio (3-0) took on Decatur’s Deaundre Wilson (3-1).

Osario got off to a slow start falling behind 2-0, but would rally to take a 4-2 lead at the end of the first round. He went into the third round with a solid 6-2 advantage and finished off the match with a 10-3 victory for the gold. 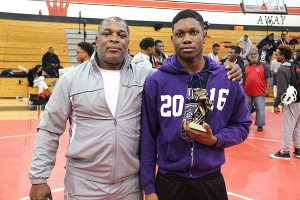 McNair finished as the runners-up for the second consecutive year as the Area 4-3A Duals champions won three gold medals and had nine wrestlers finish in the Top 6 places.

The first gold for the Mustangs came at the 138 class as Tyrese Perdue (4-0) needed a reversal in the final minute to pull out a 5-2 victory over Arabia Mountain’s Khyree Alexander. The match was 2-1 early in the third period.

Terran Hairston (3-0) had a convincing 10-3 win over Dunwoody’s Jacob Starks for his team’s second gold medal. He pulled away from a tight 2-0 advantage at the end of the first period.

Qadir Romero (3-0) picked up the Mustangs’ third gold of the Championships as he pinned Stephenson’s Lance Foucha (2-1) with 29.9 seconds remaining in the first period in a 0-0 tie at the time.

The lone gold for the Panthers came in the 220 pound class as Robert Thomas held off Decatur’s Dearies Wilson 4-3 in an exciting finish.

Wilson trailed Thomas 4-2 heading into the final period and went on the attack getting a point for an escape to pull within one. Thomas was able to keep Wilson from scoring the rest of the way to get his gold medal victory.

The Lakeside Vikings picked up 167 points to finish in fourth place, just one point behind Southwest DeKalb as they had nine wrestlers finish in sixth place or better including three gold medals. 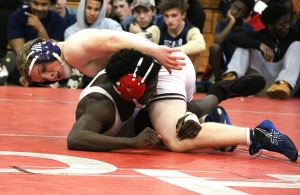 Lakeside’s Spencer Wilson improved to 48-1 on the season with his gold medal win over McNair’s Muadh As-Siddiq at 132. (Photo by Mark Brock)

Spencer Wilson improved to 48-1 on the season as he knocked off McNair’s Muadh As-Siddiq 9-2 in the 132 final. Wilson held a slim 3-2 advantage after the first period as the two battled neck-and-neck.

Kamal Feracho won all four of his matches on the way to the 195 gold to improve to 51-4 on the year. Feracho blanked Noah Boyer of Decatur 7-0 for the gold.

Gordon Lewis made it a clean 4-0 sweep in the 285 class final for Lakeside’s third gold of the Championships. Lewis was leading 2-0 with 1:40 left in the second period when he got the pin on Dunwoody’s Daniel Gothard (3-1).

Miller Grove’s Gary Freeman (4-0) ended his 152 pound match with just 36.3 seconds remaining in the first period with a pin of Southwest DeKalb’s Brandon Muse (2-1) to take the gold medal. Freeman was named the Venable Best Wrestler Award winner for his two-day efforts to win the gold.

Decatur’s Kaden Spann (3-0) captured the gold medal in the 120 division with a solid 7-3 victory over Redan’s Carlos Goodman (3-1) to round out the gold medal winners.