Arabia Mountain’s basketball teams got the 2023 basketball season off to a big start with a sweep of their Dunwoody counterparts in non-region play at Dunwoody on Tuesday night.

The Rams (1-0) clinched the sweep in the nightcap as four players hit double figures on the way to a 64-36 victory.

Dunwoody’s Emerson Mitchell tied the game at 16-16 with 5:22 to play in the half only to have he Rams respond with a 17-5 run to take command of the game.

Joseph Smith sandwiched a three-pointer by Brendan Rose with two of his own, his first at the 5:12 mark to start the run that decided the ball game. The pair’s three treys push the Rams out to a 25-16 advantage, and they never looked back.

Smith’s rebound off a missed free throw and put back made it a 33-19 game before Dunwoody’s Kadden Young put in a layup to make it a 33-21 game at break.

Traevon Williams hit a three-pointer to end a 22-point third quarter that extended the advantage to 55-26.

Smith finished with a game-high 12 points for the Rams followed Dontavius Stringfield with 11 points and 11 rebounds. Korey Gribble and DeWayne Shealey pitched in 10-points each.

Dunwoody was led by Jeremiah McDaniel and Emerson Mitchell had 9 points apiece to lead the short-handed Wildcats who fell to 1-1 on the season. 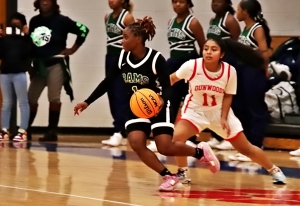 Arabia Mountain’s Myori Pruitt (1) gets past Dunwoody’s Patricia Raymonds during the Lady Rams win on Tuesday. Pruitt hit for a game-high 22 points in the game. (Photo by Mark Brock)

(G) Arabia Mountain 89, Dunwoody 26
The Arabia Mountain Lady Rams used a 16-1 run in the final half of the first quarter to pull away to an 89-26 victory over the Dunwoody Lady Wildcats in the opener.

Dunwoody’s Amari Michael pulled Dunwoody within 10-8 with 4:30 left in the first period before Myori Pruitt went to the line to hit a pair of free throws to start the big run.

Dunwoody (0-2) finished the quarter with 12 turnovers and the Wildcats lone point coming on a free throw by Anderson Bowe with 2:45 left.

Malaya Jones scored six points in the final 2:06, including a three-pointer with 1:13 on the first quarter clock, as Arabia Mountain took control of the game. Angelina Billingsley got an assist from Pruitt for a layup with 12 seconds to play to end the quarter with the Rams ahead 26-9.

Pruitt was the catalyst for a 16-2 run to open the second quarter as she hit for six points and added a pair of assists as Arabia Mountain took a 47-13 lead into the half.

A 16-0 run to open the second half led by Pruitt’s two three-pointers continued to add to the lead as Arabia Mountain cleared the bench.

Pruitt finished with a game-high 22 points followed by Sierra Burns with 19 points and 9 rebounds, Malaya Jones with 13 points and Liyah Croxton added 12 points.