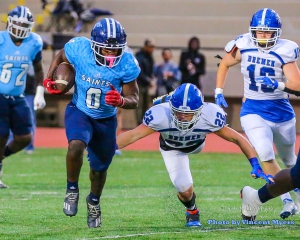 Boden Walker hit for a 60-yard touchdown run to get the Cedar Grove Saints rolling in a 48-7 win over the Bremen Blue Devils in the first round of the Class 3A state playoffs. The Saints host Hebron Christian on Friday at Godfrey Stadium. (Photo by Vincent Myers)

The No. 1 ranked Cedar Grove Saints gets a home date on Friday in the Class 3A Sweet 16 football playoffs while Stephenson (4A) and Chamblee (5A) go on the road for their second-round matchups.

The Saints defense held Bremen under 100 yards of total offense last week led by Chase Kerns second consecutive big game as he picked up 7 tackles, 3 sacks and 4 tackles for a loss in the game that upped his total sacks to 10 and tackles for a loss to 14. Quinterio Lawson had two sacks, caused a fumble and had a scoop and score as well. The Saints playing mostly schools from larger classifications has held opponents to 18.7 points.

Hebron Christian comes in having rushed for over 3,400 yards as a team led by dual threat quarterback Gavin Hall who has rushed for 2,333 yards and 30 touchdowns and thrown for 1,680 yards and 17 more touchdowns. The Lions are averaging 40.5 points per game and almost six touchdowns per game.

Cedar Grove also rushed for 363 yards in the 48-7 win as four players went over 75 yards on the ground. Boden Walker and Demarcus Smith have both rushed for over 400 yards on the season as a tandem. Sophomore quarterback EJ Colson has rushed for 342 yards and 8 touchdowns while passing for 2,104 yards and 23 touchdowns. The offense is averaging 34.9 points per game. 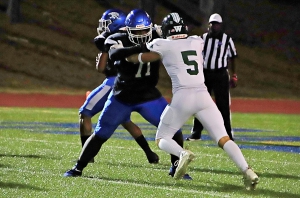 Stephenson’s Bryce Favors (71) is part of a Jaguar offensive line that has blocked for 1,000 yard rusher Devin Ingram this season. Favors and his line teammates look to make some holes against No. 1 ranked Cedartown on Friday. (Photo by Mark Brock)

Stephenson is playing to advance to the quarterfinals for the first time since 2016 after picking up its first opening round win since 2019 with its 40-38 thriller against Pace Academy last Friday. Junior running back Devin Ingram put the Jaguars on his back scoring four touchdowns, rushing for 203 yards and adding 160 yards in kickoff returns. His second kickoff return for a touchdown came with under six minutes to play with the Jaguars trailing 38-26 and he followed on his next touch going 58 yards for the winning score.

Ingram was named the Georgia High School Football Daily State Player of the Week for his performance. He has rushed for 1,264 yards and 16 touchdowns on the season. Quarterback Marte Barton has pass for 1,081 yards and six touchdowns.

Chamblee’s Quay Wright (9) creates havoc in opponents’ backfields and hopes to continue that trend against No. 1 ranked Ware County in the second round of the Class 5A state playoffs on Friday. (Photo by Mark Brock)

CLASS 5A: Chamblee (8-2) at Ware Co. (10-0), 7:30 pm
The No. 1 ranked Ware County Gators stand in the way of a trip to the quarterfinals for the Chamblee Bulldogs who travel to Waycross for their second round Class 5A state playoff game.

Chamblee, whose seniors were 1-8 as freshman, played and won their first home playoff game since 2007 with a 62-13 win over McIntosh last Friday to advance. Senior quarterback Fabian Walker (2,112 yards passing, 24 TDs; 438 yards rushing and 13 TDs) led the Bulldogs attack throwing for 292 yards (2 TDs) and rushing for two more against McIntosh. Tristian Sizemore (6 receptions, 136 yards vs. McIntosh) and Levi Bradham (5 receptions, 75 yards, 1 TD) are two of the key targets for Walker in the passing game.

Junior defensive end Quay Wright is the big play guy on defense for Chamblee with five sacks and 28 tackles for a loss on the season. He had three tackles for a loss and a half sack against McIntosh. Senior linebacker Mason Carrington (97 tackles, 4 sacks, 8 TFL) and senior linebacker Miller Meeks (50 tackles, 8 sacks, 13 TFL) are tough in the front of the Bulldog defense as well.