Stephenson’s Devin Ingram leads the Jaguars ground attack recently going over 1,000 yards on the season. Ingram and the Jaguars host Pace Academy on Friday to kickoff the state playoffs in DeKalb. (Photo by Mark Brock)

The Stephenson Jaguars and Columbia Eagles open the playoffs on Friday to kick off the 2022 GHSA High School Football State Playoffs for six DeKalb County entries.

Stephenson (6-3) plays host to the Pace Academy Knights (8-2) at Hallford Stadium on Friday at 7:30 pm to open the Class 4A state playoffs in the first ever meeting between the two teams.

The Jaguars are the Region 6-4A runners-up following a 42-13 win over Southwest DeKalb last week. Miller Grove’s win over Westminster sealed a home game for Stephenson. The Jaguars are led on offense by the running back duo of Devin Ingram (157 carries, 1061 yards, 14 TDs) and Cheik Keita (83 carries, 564 yards, 7 TDs) as the pair both went for over a hundred yards against Southwest DeKalb.

Junior linebacker Kaleb Bristow anchors the defense for Stephenson with a team leading 85.5 tackles through eight games. He has 2.5 sacks, 3.5 tackles for a loss, two interceptions, one fumble caused and one fumble recovery on the season. 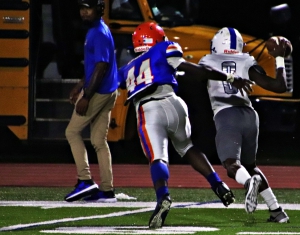 Columbia’s Arlando George (44) chases down a Washington running back during regular season action. George and his Columbia teammates head to Kennesaw to take on 9-1 North Cobb Christian on Friday. (Photo by Mark Brock)

Columbia (7-3) at North Cobb Christian (9-1)
Columbia wrapped up the regular season with a 44-0 win over Towers last weekend to improve to 7-3 on the season and the No.3 seed out of Region 5-2A in tow.

The Eagles travel to Kennesaw to take on North Cobb Christian on Friday at 7:30. North Cobb’s only loss was a 30-12 defeat at the hands of undefeated South Atlanta (9-0). Columbia has rushed for over 2,500 yards on the season led by Royce Tolbert (114 carries, 949 yards, 7 TDs) with Lamaze Williams (4 TDs), Roland Edwin (4 TDs) and quarterback Elijah Morgan (7 TDs) all with over 400 yards rushing each. Morgan has also thrown for 1,036 yards and 10 touchdowns with Jadan Baugh accounting for 398 yards receiving and five touchdowns. Baugh has also rushed for 300 yards and two touchdowns.

It is the first ever meeting between the two teams. 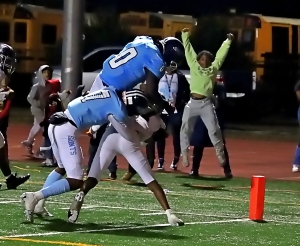 Cedar Grove’s Boden Walker (0) dives for a touchdown in the regular season finale win over Carver-Atlanta. Walker and the Saints host Bremen on Saturday in the first round of the Class 3A state playoffs. (Photo by Mark Brock)

Three Class 5A games and one Class 3A game is on tap for Saturday for DeKalb playoff entries with No. 1 ranked Cedar Grove Saints (7-2) hosting Bremen (5-5) playing at 4:00 pm at Godfrey Stadium to start the day. 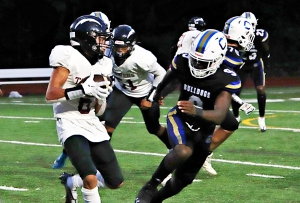 Chamblee’s Quay Wright (9) chases a Towers runner during early season action. Wright and his defensive teammates take on the high flying passing offense of McIntosh on Saturday at 4:00 pm in the first round of the Class 5A state playoffs. (Photo by Mark Brock)

McIntosh is coming off a regular season ending 21-17 win over Harris County to get the No. 3 seed. This is the first meeting between the two Class 5A schools. 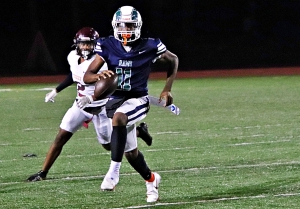 Arabia Mountain quarterback Julian Shanks (11) uses his legs against Tucker in the regular season finale. Shanks and the Rams travel to face Northgate on Saturday night in the Class 5A state playoffs. (Photo by Mark Brock)

A road trip to Newnan is on the agenda for the Arabia Mountain Rams as the Region 4-5A No. 3 seed takes on Region 3-5A No. 2 seed Northgate on Saturday at 7:30 pm.

Senior running back Solomon Rayton has almost 1,600 career rushing yards with 755 this season with 5 touchdowns to lead the Rams ground attack. Sophomore quarterback Julian Shanks (197-99-5) has almost 1,200 yards passing with 16 touchdowns. Receivers Daniel Ndukwe (4 TDs), Jaiden Figaro (2 TDS) and Jordan Miller (4 TDs) all have over 200 yards receiving on the season.

Northgate finished its season on a two-game streak defeating Harris County (28-3) and Drew (42-7) to secure the No. 2 seed. This is the first meeting between the two programs.

Tucker’s Ethan Sanders (11) rips off a run against Miller Grove in the season opening win for the Tucker Tigers. Tucker heads to Columbus on Saturday to take on 9-1 Columbus in the first round of the Class 5A state playoffs. (Photo by Mark Brock)

Tucker (4-6) vs. Northside-Columbus (9-1)
Another road game for a DeKalb team has the Region 4-5A No. 4 seed Tucker Tigers heading to Columbus to take on Northside with kickoff set for 7:30 pm.

The Tigers are coming off a tough 14-13 loss to Arabia Mountain that relegated them to the No. 4 seed. Tucker doubled its win total from a year ago and kept a 16-year playoff streak alive. Tucker is led by junior running back Jordan McCoy (135 carries, 1038 yards, 14 TDs) who has played in just seven of the 10 games this season. His stable mate in the backfield is senior Ethan Sanders (94 carries, 532 yards, 9 TDs) who is great compliment to the speedy McCoy.

Junior defensive end Christopher Jackson is a catalyst for the defense with 9 sacks and 6 tackles for a loss through nine games while senior defensive end Nakobi Spurrier has racked up 34 tackles (5 sacks, 6 TFL).

Northside is riding an eight-game win streak coming into the first-round playoff matchup against Tucker. The Patriots ended the season with a 57-14 win over McIntosh. This is the first meeting between two perennial playoff teams.