Rick Kneisel is now retired and spending time with his longtime companion Ranger. He coached just down the street for a few years after moving back to Ohio. (Courtesy Photo)

Rick Kneisel was surprised to learn of his selection as one of the Georgia Dugout Club Hall of Fame honorees for the Class of 2023.

Kneisel coached baseball for 13 seasons (12 at Dunwoody, 1 at Peachtree) in DeKalb County compiling an impressive 223-107-1 record (212-95-1 at Dunwoody) which included a tough two games to one loss in the 1990 Class 4A state championship best-of-three series against Evans.

“I’m extremely honored and humbled to be included on that list with many from DeKalb and others I coached with and against over the years,” said Kneisel. “I’m not sure I hold a candle to guys like Greg Goodwin (Redan, 228-96), Dion Williams (McNair, 200-92)), Marvin Pruitt (Lakeside/Stephenson/Redan, 510-300) and so many others who are in the Hall of Fame.”

“It was some of the most competitive baseball in DeKalb at one time,” said Kneisel, “You had to be prepared to play every game going against teams coached by those guys, not to mention Jerry Queen at Marist. We were battling each other to make the playoffs and it would come down to those head-to-head meeting.”

Goodwin and Williams remember their battles with Kneisel’s teams over the years as some of the toughest games on the schedule.

“Rick was a guy who made you be on your toes,” said Goodwin. “He and his players were always prepared, and you knew you were in a battle. Only the region winner got to go to the playoffs back then and many times those games decided who got to go.”

Williams remembers Kneisel for the way he and his teams played saying, “When I think about Rick, I remember how he was a gentleman of the game. He and his teams always played the right way and with class. That is a testament to Rick and how his teams reflected the kind of person he was.”

Tom Bass, currently Principal at Dunwoody High School, took over the Wildcat baseball program when Kneisel stepped down as the head coach and remembers Kneisel fondly.

“Rick really helped me out for a couple of years before moving on,” said Bass. “I can say you cannot find a better person. He absolutely loved all his students and athletes. I never heard a negative word about Rick. He was a class act and is very deserving of going into the Hall of Fame.”

Rick Kneisel celebrates a big play by his Dunwoody team.

One of the toughest years for Kneisel was the 1989 season when Peachtree and Dunwoody merged into one school, and he had to blend in returning starters and newcomers from both schools into one team.

“That was really a tough situation because we knew some kids who played at both schools might not make the cut,” said Kneisel. “There was no way to run practices where 40 kids could get in the work in the batting cage and on the field. We tried to make it where a kid could earn time on the playing roster, and it seemed to work well.”

That 1989 squad finished 19-7 and led to what turned out to be Dunwoody’s best playoff run at that time with a 1990 Class 4A runner-up finish to Evans. The series was tied 1-1 and late in a 1-1 when Evans gambled on stealing home and scored the winning run to capture the state title.

“I was very fortunate to get some talented players over the years at Dunwoody,” said Kneisel. “They were talented and worked hard to do things the right way. We had several sets of brothers over the years that were part of the success like the Redovians, Strouds, Stetzers, Ebersols and Whitleys. Not to forget guys like Robert Tyree (10-0 in 1990) and David Golding (one-armed pitcher) who were clutch in some big games. My assistant coach Will Jackson was also a big part of our success at Dunwoody.”

For Kneisel who never even intended on teaching after receiving his undergraduate degree in Zoology at Ohio University and Masters from Emory University his tenure as a baseball coach turned out to be one to be recognized.

“I had to earn my teaching certificate along the way and helped out Roy Massey with the Dunwoody team before getting the job at Peachtree in 1982,” said Kneisel. “It was a learning process and we had a couple of tough years after moving over to Dunwoody in 1983. I was learning and loved working with the kids teaching the game.” 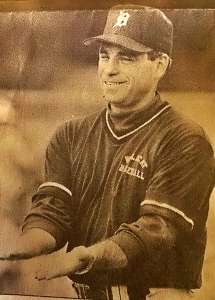 Rick Kneisel gives signals to his team back during his Dunwoody years.

Kneisel took a break from coaching after the 1994 season and five region titles along with four 20-win seasons when the regular season consisted of just 23 games. He would go on to Lassiter as an assistant be part of two state championship teams in 1999 and 2006.

“Lassiter coach Mickey McMurtry gave me an opportunity to stay involved in baseball,” said Kneisel. “I love the game and working with the kids.”

He moved back to Ohio in 2013 to take care of his mother and after her passing was talked into coaching for four seasons at the high school (Wilmington) down the street from where he lives.

Wilmington won its league under his direction, and he retired again in 2017.

“I hope I taught the kids the right way to play the game and to have the right kind of attitude to be part of baseball and in their lives,” said Kneisel.

From his former opponents it is apparent that he did just that in the time he was involved in the game of baseball.