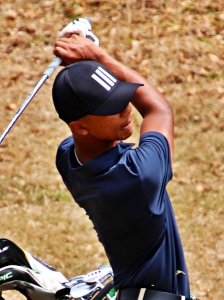 Southwest DeKalb junior Ethan Quitman has year-long dream come true as he gets to hit the Hope First Tee Ceremonial Tee Shot to kick off the 2022 Tour Championship at East Lake Golf Club on Thursday, August 25. (Photo by Mark Brock)

“I didn’t know about the tee shot until we went to the tournament last year,” said Quitman. “I knew then I wanted to get the opportunity.”

He also picked up a $5,000 Hope First Tee scholarship to help with his college tuition. He had to apply for the opportunity, write an essay, and play a tournament against other players to earn the right.

He played 18 holes at Bobby Jones Golf Club and a final nine at East Lake. Trailing by two strokes with eight to play he rallied to win on the final hole as his competitor missed a put and he sank his to clinch the win.

“My Dad told me to stay optimistic and that it takes just one stroke to win a tournament,“ said Ethan. “And it came down to that one last stroke.”

The 16-year-old just picked up the game of golf three years ago when he attended the Top Golf Academy for a week and the formal Georgia Martial Arts state champion loved the challenge of learning the game.

“It was hard learning things there that younger players and many of those my age had been working on since they were seven or eight years old,” said Quitman. “I started competing against those players and they were a lot better. I knew I would have to work harder to get where they were.”

Quitman’s father, Robert Quitman, had not granted Ethan’s request to return to a robotics camp at Emory for a second year that summer due to his academics not up to what they had agreed upon.

“I told Ethan he would have to work on his academics that summer but got to feeling bad he was not getting to do anything during the summer and asked if he wanted to try it out,” said Robert. “He used to go to the driving range with me over the years when he was younger, but I never pushed the game on him. He went to the Academy and got to hang out with other kids learning the game.”

While at the Academy Ethan struck up a relationship with a former DeKalb County and Arabia Mountain alum, Darius Davis, who was one of the instructors. Davis talked with him about how it was about more than just golf and how he earned a scholarship to play at Maryland -Eastern Shore University to further his education.

Davis, a 2014 DeKalb County Golf Championships runner-up and the 2013 Hope First Tee participant, said, “I am so happy for him. He has put in the hard work. When he came to the Academy that week, I saw an image of myself in him. He just soaked up everything like a sponge. It feels like he is just following in my footsteps.”

“Darius started working with Ethan that week and told me he saw potential and wanted to work with him some more, “ said Robert. “He went on to give him three or four lessons before he was transferred to Orlando and Ethan was hooked.”

Ethan set forth his goals of going to college on scholarship and playing on the PGA Tour.

“I told him if he wanted to be a pro, he had to practice like one,” said Robert. “He knew that it was bigger than just golf. His grades improved and he is over a 3.0 GPA now. He is developing relationships and contacts that will serve him well into the future.”

Ethan began watching YouTube videos of several of his favorite players like Collin Morikawa, Justin Thomas and Rory McElroy to see how they practiced.

“He began practicing every day and I encouraged him to take Sundays off to help his body recover,” said Robert. “But some Sundays he will come and say friends are wanting to go play at a certain course and I end up taking him. I told him one day I felt like I was his Uber driver taking him from course to course to play or practice. He just replied, ‘Yes, you are my Uber drive’.”

Improvement on the course showed in his second DeKalb County Golf Championships as he dropped 20 strokes (101 to 81) from his first attempt in 2021 to finish sixth overall at Sugar Creek Golf Club this past spring.

“That finish really meant a lot to me,” said Ethan. “I really pushed through the back nine and wanted it bad. I am really proud of the progress.”

A key factor in his development is working with the First Tee of Atlanta program playing and practicing with others at Charlie Yates Golf Club and other places.

“First Tee has introduced me to a lot of good people from players to someone like Nyree Williams who has encouraged me and taught me a lot,” said Ethan. “Mr. Jeff Dunovant and Mr. Marvin Hightower (both part of First Tee) saw me and encouraged me to apply.”

Both Robert and Davis saw Ethan’s desire to get better but also his will to help others get better as well. 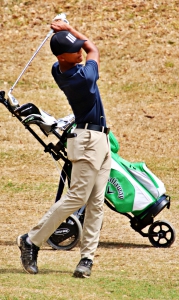 A good back nine during the 2022 DCSD Golf Championships helped Southwest DeKalb’s Ethan Quitman to a sixth place finish. He knocked 20 strokes off his score from 2021. (Photo by Mark Brock)

Ethan’s dad remembers being at a First Tee event when a mother of girl younger than Ethan approached Robert talking about how frustrated her daughter was with her driving as she prepared for a driving, chipping and putting competition.

“I talked to Ethan and asked him to go help her with her driver,” Robert said. “I looked over a little while later and she was really starting to hit the driver well. She had turned from being frustrated and down to being excited, smiling and high fiving with Ethan. She went on to win the driving competition and was even outdriving many the guys.”

Davis saw the same thing during the week of the Academy saying, “Ethan was working hard to learn and ended up helping me with the other campers. He wants others to succeed as well. It is more than just being good at it himself.”

Not only will Ethan, along with Holy Innocents’ Haven Ward, get to hit the ceremonial first tee shot to open the Tour Championship that features the Top 30 golfers in the FedEx Cup standings, he gets to attend the Payne Stewart Award Ceremony for Billy Andrade on the Tuesday prior to his big day and on Sunday attend the final round of the tournament as a guest in the PGA Superstore tent.

He and Haven are also part of a pair of commercials to air during the tournament which will bring this up-and-coming golfer more into the spotlight.

His hard work has made one dream come true for Ethan and next up is getting a scholarship to play golf in college. And as he continues his work ethic to reach his ultimate dream, we may be watching him walking the courses on the PGA Tour in the not-too-distant future.