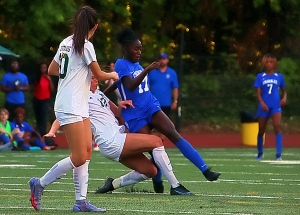 Chamblee’s Kara Croone (17) battles Blessed Trinity’s Lizzie Heller (12) for a loose ball that got away. Croone did not loose many battles on the night as she scored all three goals in Chamblee’s 3-1 win over the No. 1 ranked Titans. (Photo by Mark Brock)

Lakeside played in the 1997 title game against Marist and fell 1-0 and Chamblee now has the chance to become the first DeKalb County Schools girls’ program to win a state title as they head to McEachern High School to face Midtown in a 5:00 pm showdown on Thursday, May 5.

Blessed Trinity (19-2-1) forced the issue early on looking like the defending champions and keeping the ball mostly on the Chamblee end of the field until the Lady Bulldogs slowly began to turn the momentum pushing the ball back into the Lady Titans half of the field as the first half wore on.

Then with 16:15 left in the first half Ansley Harrison drew the goalie out and passed to a streaking Kara Croone who blasted a shot into the net behind the Blessed Trinity keeper for a 1-0 lead and the Lady Bulldogs never trailed.

Chamblee kept up the pressure to open the second half scoring two goals in the first four minutes to extend the lead to 3-0.

Kara Croone was again the villain to Blessed Trinity’s defense as she took a pass from Kyla Osborne down the middle of the field, outraced the defense and nailed a shot into the net past a diving Ava Bilderback to make it 2-0 less than three minutes into second half.

Croone was at it again less than a minute later dribbling through the middle of the Titan’s defense and again beating Bilderback to make it 3-0 with 36:23 left on the game clock. Osborne was again with assist to Croone.

Despite getting several shot opportunities Blessed Trinity could not solve the Chamblee defense and keeper Alexis Harris (8 saves) until a hand ball call in the box gave the Titan’s a penalty kick.

Grace Eatz managed to get the ball past a diving Harris to trim the lead to 3-1 with 20:51 remaining in the match.

Chamblee continued to play solid defense and push the ball up the field to take time off the clock while getting a few chances they could not convert to completely put the game away.

The Lady Bulldogs lost a disappointing 8-2 match to Blessed Trinity in last year’s second round of the state playoffs so this win tasted even better. 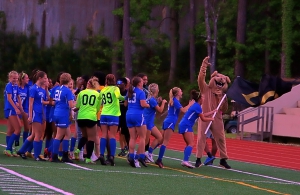 The Chamblee Lady Bulldogs celebrate with their classmates following their big Class 5A state semifinal victory over Blessed Trinity. (Photo by Mark Brock)

As the student body counted down the final five seconds the Lady Bulldogs stormed across the field to celebrate their big victory with their classmates.

Chamblee was also just the third DeKalb team to reach the semifinals joining Lakeside (3 times) and Stone Mountain (1994). The 21-1-1 record is a school and DeKalb County best surpassing Lakeside’s 18-1-1 record in 2013. The previous school best came under current head coach Mattie Caspar in 2018 at 14-4-2.

Chamblee’s opponent, Midtown, set up a rematch from Chamblee’s 6-3 regular season victory back on March 29. Midtown knocked off Chamblee’s Region 5-5A foes St. Pius 2-1 and Decatur 2-0 in back-to-back games to reach the championship match.