No. 10 West Forsyth Holds Off Dunwoody 3-2 to Advance to State Semifinals 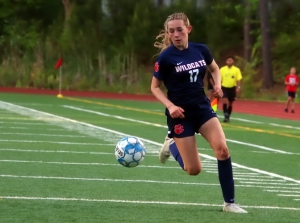 Dunwoody’s Lindsey Lampron scored on of the Lady Wildcats two goals in their 3-2 loss to West Forsyth in the Class 7A girls’ Elite 8 soccer state playoffs. (Photo by Mark Brock)

West Forsyth took an early 1-0 lead and despite a furious effort the No. 6 ranked Dunwoody Lady Wildcats came up short in a 3-2 Class 7A girls’ soccer state playoff quarterfinals loss at North DeKalb Stadium on Monday night.

Alexi Force got West Forsyth on the board with 25 minutes to play in the first half and scrum in front of the goal with 19:08 play ended with West Forsyth taking a 2-0 lead.

Dunwoody got moving down two goals as Kate Barrett found Lyndsey Lampron in front of the goal, leapt into the air and headed the ball into the net over the goalkeeper to cut the lead to 2-1 with 11:51 to play in the half.

A pair of open net shots went wide I the final 8:26 of the half for Dunwoody and West Forsyth’s keeper knocked away another Lady Wildcat shot with 1:35 to play to help her team hold on to a 2-1 lead going into the break.

The two teams battled almost 18 minutes into the second half when West Forsyth put a headed into the net off a corner kick to go up 3-1.

Dunwoody keeper Ella Holland put forth a big effort in the second half with eight saves to keep the Lady Wildcats within striking distance.

Anna Kate McGee got loose on the right side of the goal as the clock ticked towards the eight-minute mark. Moving past a defender McGee lofted a shot just under the cross bar to cut the West Forsyth lead to 3-2 with 8:09 to play.

West Forsyth’s keeper had to withstand the Dunwoody pressure late with three big saves in the final four minutes of the game. The biggest came at the 3:46 mark as she slowed a shot down and grabbed it while laying on the ground just before it went over the goal line.

She would make a save at the 2:41 mark and finished off with a final save as the clock ticked down to eight seconds to preserve the win.

Dunwoody finishes the season at 16-3 overall.