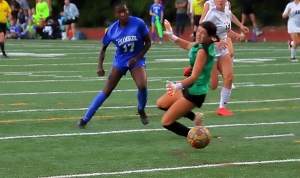 The No. 3 McIntosh Lady Chieftains poured gas on a fire by scoring first against the No. 2 ranked Chamblee Lady Bulldogs who roared back for a 6-2 Class 5A girls’ state soccer Elite 8 playoff match at North DeKalb Stadium on Monday night.

McIntosh’s Keara Collins grabbed a deflected shot and put in the goal just four minutes into the game to go up 1-0.

Chamblee took offense to the score blitzing the McIntosh defense for four consecutive goals over the next 12 minutes of play.

Kara Croone, who had four goals on the night, gathered in a pass from Solai Washington off a deflection and found the back of the net to knot the game at 1-1 with 33:01 left in the opening half.

She would make it 2-1 in favor of Chamblee less than six minutes later as she jumped a pass at midfield, dribbled quickly down the middle of the pitch and blasted a shot past McIntosh’s keeper Avery Heeb with 27:57 to go to give Chamblee the lead for good.

Just over four minutes later Solai Washington was on the attack for Chamblee deep in McIntosh territory when she blasted a shot past Heeb for a 3-1 advantage at the 23:20 mark in the first half.

Washington teamed up with Croone again just two minutes later as she dribbled down near the backline and lofted a nice pass to Croone who put it in the net for a 4-1 Chamblee advantage with 21:33 left in the opening half.

Natalie Eydam cut the deficit for McIntosh to 4-2 at the half with her goal coming at the 14:44 mark.

It took only 48 seconds into the second half for Chamblee to up the margin to 5-2 as Croone got loose down the middle of the field again to add to her hat trick with her fourth goal of the night.

Kayla Osborne aided Washington’s second goal of the night with a pass down the right side that Washington put past Heeb to extend the lead to 6-2 with 29:01 to play.

Chamblee moves on to host No. 1 ranked Blessed Trinity on Thursday night at North DeKalb Stadium. Blessed Trinity (19-1-1) defeated Northgate 3-0 to advance. A time for the match will be announced at a later time.