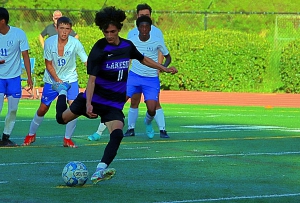 Lakeside’s Brayan Zetina scored a pair of goals in the Vikings 5-0 win including this penalty kick for a 1-0 lead at the half. (Photo by Mark Brock)

The Lakeside Vikings and Tucker Tigers both picked up shutout victories on Friday night in the first round Class 6A boys soccer state playoffs to join four other DeKalb teams in the Sweet 16 this coming week.

Brayan Zetina scored the first and last goals of the night at the No.3 ranked Lakeside Vikings (16-0-1) knocked off the Brunswick Pirates (11-8-0) 5-0 at Adams Stadium.

The two teams were 0-0 when a penalty in the box gave the Vikings a penalty kick with 53.5 seconds left in the first half. Zetina stepped up for the attempt and converted as he sent the ball past a diving Bosquez to send Lakeside into the half up 1-0.

Mauricio Garcia converted a feed from Seiji Takeuchi seven and half minutes into the second half to extend the Vikings’ lead to 2-0.

Eight minutes later it was Michael Valente’s turn as he took a pass up the middle from Nicholas LeMadrid make it a 3-0 lead for Lakeside.

Larry Humphries put a header into the net off a pass from Ian Bouer-Schlitt to push the advantage to 4-0 with 14:48 to play.

Zetina capped the scoring on an assist from Damian Heard at the 9:28 mark for the final of 5-0.

Tucker 6, Statesboro 0
The No. 3 seed Tucker Tigers traveled to Statesboro on Friday night and came away with a 6-0 road playoff victory over Statesboro to advance to the Class 6A Sweet 16 round.

Tucker’s Carlos Castro and Amedeo Isaya both scored two goals to lead the way for the Tigers in the win. 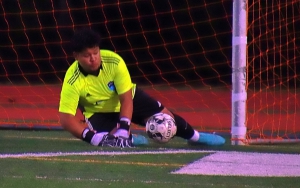 CLASS 4A STATE PLAYOFFS
Both DeKalb entries into the Class 4A state playoffs came up short on Friday as Druid Hills and Stephenson dropped their playoff matches to end their seasons.

The No. 8 ranked Druid Hills Red Devils (8-10) fell in the penalty kicks shootout to the East Hall Vikings at Adams Stadium on Friday.

East Hall had played the Red Devils to a 0-0 tie until the 5:37 mark of the second half when Druid Hills broke through with a goal by Owen Grieswood as he slipped defenders and beat Vikings’ goalie Alexander Perez to make it 1-0 for the Red Devils.

East Hall answered with a goal in traffic just one minute later to knot the game 1-1.

Druid Hills keeper Alex Garcia-Perez made a big save with 30 seconds to play that sent the game into overtime. The two teams went scoreless in the two 10-minute overtime periods to force the penalty kick shootout.

Angel Perez started East Hall off with the first penalty kick conversion before Perez knocked away Druid Hills first attempt. East Hall went up 2-0 on a shot by Amado Valladarez. Druid Hills bounced back to pull within 3-2 on makes by Nate Green and Eh Soo.

Garcia-Perez made sure a high shot by Eden Casterjon stayed out of the goal, but a Druid Hills shot went wide to give East Hall the opportunity to close out the win.

Perez came out of goal for the Vikings and won the duel with his Druid Hills rival to close out the win 4-2 in the shootout.

In other Class 4A action Stephenson traveled to No. 6 Jefferson and dropped an 8-0 decision to conclude the Jaguars season at 6-7-1.

CLASS 3A STATE PLAYOFFS
The Towers Titans went on the road to Rabun County on Friday night only to fall 6-0 to end their season. Towers finished 5-6-1 on the year.