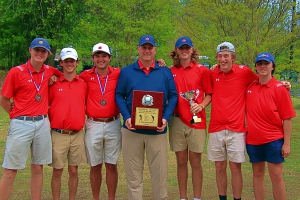 It is the 19th title overall for the Wildcats and 14th for Coach Doug Friedlander as six Wildcats finished in the Top 10 on the leaderboard to secure the win.

Dunwoody junior Braeden Rice won his second consecutive title with a strong back nine to overcome Chamblee senior Ethan Santucci 74-75 in a match that came down to the final put on the par-5 18th hole.

Santucci opened with a one-under par 35 on the front nine and Rice came in with a 40 to trail by five stokes with nine holes to play.

Rice reached the 18th green in two with an opportunity for an eagle while Santucci leading by one reached in four looking to par. 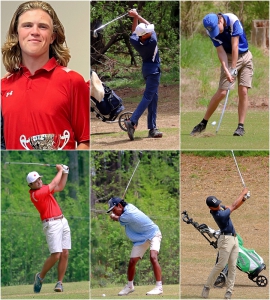 Santucci two-putted to take a bogey and the pair were tied with Rice going for the eagle and the win. Rice’s eagle put rolled past the hole, but he holed the birdie put coming back to claim his second title. Rice became the first back-to-back winner since Dunwoody’s Ryan Elmore who won four consecutive from 2010 to 2013.

It was also the second consecutive year Rice and Santucci finished one-two at the top of the leaderboard.

Second place Lakeside was led by senior Nick Dupont led the Vikings into second place as he took third with a 77 on the day. Lakeside had a pair just outside the Top 10 to aid the second-place cause led by senior Ben Lang (T11, 88) and sophomore Aidan Tuttle (13th, 89).

Other Top 10 finishers include Southwest DeKalb sophomore Ethan Quitman in sixth with an 81 and Tucker senior Charlie Cooper in a tie for ninth with an 85.

See link below for complete results from the 2022 DCSD County Golf Championships: