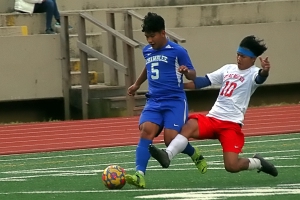 Chamblee scored two goals in the final 7:13 of its Region 5-5A match with Stone Mountain to secure a 3-0 victory and complete a region sweep of Stone Mountain in boys’ high school soccer action at North DeKalb Stadium on Tuesday.

The Bulldogs led 1-0 from the first 29 seconds into the game and turned up the pressure in the final 27 minutes of the game making Stone Mountain goalie Ahmed Basid fight off five hard shots on goal. On the fourth shot attempt the Bulldogs broke through as Travis Conner took a Grant Polk pass while splitting a pair of defenders and got it past Basid with 7:13 to play to make it 2-0 Bulldogs.

The fifth came with 4:59 to play when Chamblee’s Grant Polk was fouled and was awarded a penalty kick. Basid was up to the challenge knocking the shot away from the goal and with help from his defense smothered the ball to keep the score at 2-0.

Chamblee put the cap on the game with 2:48 remaining as Gabe Smith chased down a loose ball ahead of a Stone Mountain defender and found the small gap between the left goal post and a diving Basid to make the final of 3-0.

Chamblee keeper Max Loeffler made a sliding save on a Stone Mountain breakaway just before the final horn to keep the game a clean sheet for the Bulldogs.

Both teams had four shots on goal the rest of the first half with Stone Mountain coming close to knotting the score with five seconds left in the opening half of the game.

Stone Mountain (1-7, 0-5) got possession with 12 seconds on the clock and moved the ball up the field quickly and Loeffler cut off a pass coming out of goal. His pass was short and picked up by a Stone Mountain striker. He then had to make a diving save with five seconds left in the first half to keep the Bulldogs lead of 1-0 going into the break.

Loeffler finished the game with seven saves in his 80 minutes in goal. Stone Mountain’s Basid finished the night with 10 saves against 15 shots on goal by the Bulldogs. 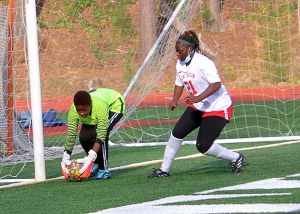 Stone Mountain goalkeeper Manish Kaykez (left) makes one of her six saves in the first half against No. 3 ranked Chamblee. Defensive teammate Maimuna Tamba (21) comes over to help defend. (Photo by Mark Brock)

GIRLS: Chamblee 10, Stone Mountain 0
Chamblee forward Kaylee Powell finished the night with a hat trick to help lead the Lady Bulldogs to a 10-0 Region 5-5A win over the Stone Mountain Lady Pirates in the opener at North DeKalb on Tuesday.

Sarah Washburn kick started the runaway win with a goal just 25 seconds into the match and three minutes later passed to Tani Blankenship to make it a 2-0 Chamblee lead.

Claudia Freshwater made it 3-0 one minute later with her only goal of the night and Washburn made it two on the night less than two minutes later to push the advantage to 4-0 with 33:46 left in the first half.

Paige Parker got the assist with a pass on Powell’s first goal of the night at the 32:00 mark and just 14 seconds late Blankenship joined the two-goal club as the lead ballooned to 6-0.

Starting goalkeeper Alexis Harris got to go infield and picked up a goal with 26:20 to make it 7-0 and end the half.

The second half was shortened to 20 minutes by rule. Powell scored twice in the first 3:01 of the second to get her hat trick. Washburn picked up her second assist of the game on the play. Josie Byrne made the assist on the Powell’s third goal of the game with 16:59 to play.

Katlyn Meer ended the game by the mercy rule as she took a pass from Washburn for the final goal of the game to make it 10-0.

Washburn finished the night with two goals and three assists as the No. 3 ranked Lady Bulldogs improved to 12-1-1 overall and 7-0 in region play. Chamblee has a big match on Friday against No. 4 St. Pius with the Region 5-5A title on the line.