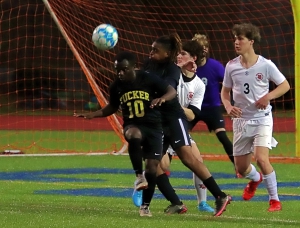 Tucker’s Amedo Issaya (10) battles for control of the ball in front of the goal. Druid Hills Joe Win (3) and an unidentified teammate come up to defend. (Photo by Mark Brock)

A defensive struggle between the DeKalb rivals featured just six combined shots on goal (Tucker 4, Druid Hills 2) in the opening half as Tucker scored 10 minutes into the game

Amadeo Issaya lifted a corner kick in front of the goal where it got bounced around in the crowd. Tucker’s Carlos Castro managed to get control long enough to knock the ball into the net for the goal at the 30:02 mark of the opening half to give the Tigers (5-5-3) the lead.

Defense continued to be the name of the game in the first half as neither team got a goal in the final 30 minutes of the half. Both Tucker goalie Alex Rice and Druid Hills Grant Hottel had two saves in the final 30 minutes. Hottel’s second save came with just 12 seconds to play as he kept the Red Devils within the 1-0 margin at the half.

Tucker had six shots on goal in the second half with several going just wide or over the crossbar as the two teams defenses continued to keep the other team at bey.

Druid Hills got the ball up the field on several occasions in the second half, but could not get more than one shot on the goal.

As the Red Devils (5-7) kept pressing on offense the clock continued to tick down and just before the two-minute mark the Tigers got a breakaway as they got the ball out of their end to Issaya who was racing down the middle of the field.

Issaya sped down the field ahead of the Red Devils defenders and put the ball past a diving Hottel and into the net for a big insurance score with two minutes to play in the game.

Druid Hills got the ball into the Tucker end in the final minute only to come up empty as the final horn sounded to end the game. 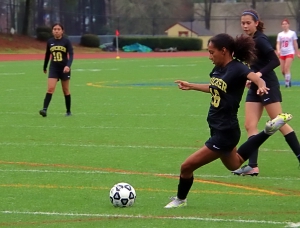 Tucker’s Jenni McIntosh lines up her second of three goals in the first half on her way to the hat trick. McIntosh scored three goals in 10 minutes to fuel Tucker’s 5-1 win over Druid Hills. (Photo by Mark Brock)

GIRLS: Tucker 5, Druid Hills 1
Tucker’s Jenni McIntosh completed a hat trick in a 10 minute stretch of the first half to give Tucker a 3-0 lead on the Druid Hills’ Lady Red Devils on the way to a 5-1 win in the girls’ opener at Hallford.

The two teams went scoreless for nearly 20 minutes of the first half despite Tucker keeping the ball on the Druid Hills’ end of the field. The Tigers (7-6) kept pressure on in the opening half piling up nine shots that resulted in a 4-0 halftime advantage.

McIntosh got the scoring going as she sent a blast under the crossbar from 20 yards out to make it 1-0 with 20:13 left on the first half clock. She would score from closer in at the 16:39 mark and the 10:02 mark to complete her first-half hat trick that put Tucker up 3-0.

Druid Hills goalie Milly Peta battled through the barrage picking up four saves along the way.

Tucker’s Trinity Head made it a 4-0 lead at the half as she controlled a corner kick from teammate Paulin Ramos-Pachco with 2:05 to play in the opening half.

Tucker needed less than two minutes of the second half to extend the lead to 5-0 when Samantha Kirn found an opening and fired towards the goal. Peta got her hands on the shot, but it deflected off her hands and just under the crossbar with 38:38 to play.

As the two teams began to substitute Tucker goalie Kalie Rice left the game after a relatively quiet night in goal. Amala Lindquist took her place in goal.

Druid Hills got on the scoreboard with 13:43 to play when Celia Sanchez found an opening in the Tucker defense and fired a shot into the net to make the final score of 5-1.