Lakeside’s Charisse Mmiller (20) beats a Holy Spirit Prep defender on the way to a first half goal in the Lady Vikings’ 10-0 win on Tuesday night at Avondale Stadium. (Photo by Mark Brock)

Lakeside doubled up on shutout wins in a doubleheader sweep of Holy Spirit Prep in high school soccer matches on Tuesday night at Avondale Stadium.

Tristan Linscott and Caitlin Chalker both scored two goals on the way to a 10-0 victory by the Lady Vikings (8-2) against Holy Spirit (1-2) in the night’s opening game.

Lakeside wasted little time in the getting on the scoreboard scoring twice in the first 3:35 of the game to jump out to a 2-0 lead. The first goal came off the foot of Isabel Tiul-Sheffler on an assist by Caitlin Chalker just two minutes and 14 seconds into the game.

Eleanor McLaren’s shot into the goal made it 2-0 just one minute and 21 seconds later.

Lakeside’s Charisse Miller took a pass right up the middle and put a goal in past the Holy Spirit goalie to make it 3-0 with just over 20 minutes left in the first half.

Linscott got her first goal of the night on a shot coming in from the right wing and a minute later put a corner kick into the air to Olivia Losken who headed the ball into the net to make it 5-0. Leia Johnson’s goal at the 7:42 mark made it 6-0 at the half.

Linscott ended the game with 24 seconds left on the clock with her runaway goal straight at the goalie. 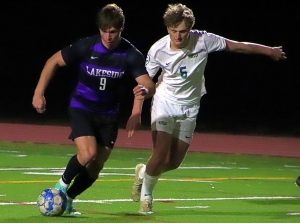 Lakeside’s Zach Martin (9) slips past a Holy Spirit Prep defender on the way to one of his two second half goals in the Vikings 4-0 win. (Photo by Mark Brock)

BOYS – Lakeside 4, Holy Spirit Prep 0
Finn Marchisen had a relatively quiet night in goal for the No. 4 ranked Vikings in a 4-0 shutout over Holy Spirit Prep in the nightcap at Avondale Stadium.

Marchisen, the junior goalkeeper for the Vikings, was only challenged three times in the game and turned away all three shots to keep Holy Spirit off the scoreboard while his teammates kept the pressure on while scoring four goals on the offensive end.

Rohan Blackwell got the Vikings (9-0) on the board first less than five minutes into the game as he got one past the goalie into the left corner to make it 1-0.

Lakeside’s Zach Martin scored a pair of goals in the second half to round out the scoring for the 4-0 win. Martin struck less than six minutes into the second half as he took a feed in front of the goal from Sam Newmyer coming from the left side to up the lead to 3-0.

Martin wrapped up the scoring at the 10:21 mark of the second half as he beat his defender and then the goalie to put the ball into the right side of the net for the final goal of the game.