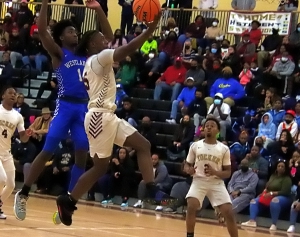 Tucker’s Raylan Barrion sails to the basket for two of his 16 points in the Tigers 51-45 win over the No. 2 ranked Westlake Lions. (Photo by Mark Brock)

The No. 6 ranked Tucker Tigers outplayed the No. 2 ranked Westlake Lions in the fourth quarter on the way to a 51-45 victory to win the Region 4-6A boys’ championship at Tucker on Friday night.

It was the third of the night for DeKalb with both the Columbia Lady Eagles (Region 6-2A) and the Druid Hills Red Devils (Region 6-4A) also brought home titles on the night.

Christopher Whitmore’s three-pointer from the left wing with 4:57 to play gave Tucker the lead for good at 40-37 and the Tigers (21-4) withstood the Westlake pressure down the stretch for their first win in three tries against the Lions (19-5) this season.

Mitchell Taylor’s steal and dunk with 2:17 left in the game pulled Westlake within 44-43. Tucker’s Raylan Barrion hit one of two free throws with 1:57 to play to push Tucker further ahead at 45-43.

Westlake missed a shot on its next possession and Assad Lawson got the first of two big rebounds in the final minute of the game to give Tucker the ball with the two-point lead.

Christian Yeates got the ball into the front court and the Tigers let him handle the ball and spread the floor. Yeates shook his defender and drove to the right and towards the goal. He floated up and under the goal for a reverse layup to make it a 47-43 advantage with 57 seconds left.

Rodrecus Rouse found and opening for an easy layup for the Lions to make it a 47-45 game with 27 seconds to play. Josiah Lawson was fouled with 23.7 seconds remaining and converted both ends of the bonus to extend the advantage to 49-45. 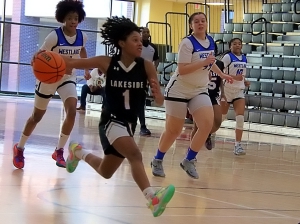 Lakeside’s Jemia Johnston (1) races to the basket ahead of some Westlake defenders during Lakeside’s loss in the 4-6A girls’ consolation game. (Photo by Mark Brock)

A long three by the Lions bounced off the rim into the hands of Tucker’s Whitmore (team high 17 points) who was quickly fouled by Westlake with 10.3 seconds on the clock. Whitmore responded by hitting his one-plus-the-bonus free throws to seal the win at 51-45.

Tucker is the Region 4-6A No. 1 seed heading to the Class 6A playoffs and will host Bradwell Institute (15-12), the Region 2 No. 4 seed, next week on a day and time to be announced.

Lakeside heads into the state playoffs with a trip to 25-1 Brunswick in the opening round with the day and time to be set.

Region 6-2A
The Columbia Lady Eagles used a strong second half to pull away from Pace Academy to take the Region 6-2A girls’ title 48-35 to earn the No. 1 seed heading into the Class 2A state playoffs next week.

Brianna Culpatrick and Kerselin Anderson both hit a three-pointer in the third period as the Lady Eagles (21-6) extended a 19-15 lead to 31-24 heading into the fourth quarter against Pace (16-7). Tekiarah Jones score six of her 14 points in the third quarter and Anderson added 5, including her second three-pointer of the half, as Columbia continued to pull away.

Columbia will host Union County Tuesday at 6:00 pm in a doubleheader with the Eagles and Banks County following at 7:30 pm. 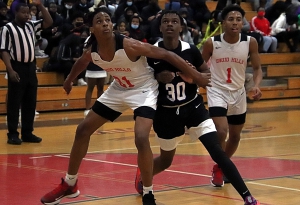 Druid Hills Keshawn Evans (21), shown here in an early season game against Miller Grove, had 15 points and 10 rebounds in the Red Devils’ 50-42 win over Marist in the Region 6-4A boys’ title game. (Photo by Mark Brock)

KaRon Strickland (8 points) hit a three-pointer with less than three minutes to play to put the Red Devils up by one. Harry Gewirtz had 17 points to lead Druid Hills and Keshawn Evans put up a 15-point, 10-rebound double-double.

Druid Hills will host the loser of the Region 8 boys’ consolation game between Cedar Shoals and Chestatee in the first round next week.

The Stephenson Lady Jaguars hung tough the No. 5 ranked Marist Lady War Eagles (23-3) before falling 46-43 in the 6-4A girls’ title game at Stephenson. Kelli Finkley led Stephenson with 18 points and Blezzy Abong added 10 points. Stephenson hosts Cedar Shoals in the first round of the Class 4A state playoffs on Tuesday with a time to be determined.

Arabia Mountain (19-6) earned the No. 3 seed out of Region 6-4A with a 62-59 win over Mays (10-15) in the opener at Stephenson. Arabia Mountain will travel to Chestatee for their first round game. The date and time has yet to be set.

Region 5-5A
The Lithonia Bulldogs and Southwest DeKalb Lady Panthers advanced to the Region 5-5A championship games with victories at Decatur on Friday.

Southwest DeKalb plays Decatur in the boys’ consolation game at 4:30 on Saturday.

Cedar Grove is set for a road game at East Forsyth in the Class 3A opening round. Redan travels to Lumpkin County for its first round game.