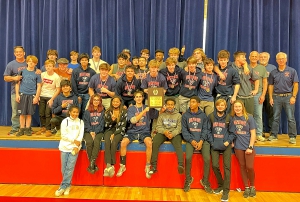 Luke McSorley’s squad won its fifth title (2016-17, 2019-20, 2022) in the past six events held (no event in 2020) and Dunwoody’s fifth overall in the 59 years of the event as the team went a combined 38-18 in the tournament including 14 wrestlers finishing in the top six in their weight class. The 14 placing wrestlers included six reaching the finals of their class winning one gold, five silver and 2 bronze medals along the way.

The long gold medal for Dunwoody came in the 113 class with Charlie Ruark claiming the top prize 4:41 into the match with a pin of Southwest DeKalb’s Cameron Allen. Ruark also won his semifinal match via pin in 1:25 over Druid Hills entry Ehteekaw Soe.

Runner-up Southwest DeKalb had eight wrestlers reach the finals coming away with six gold medals to lead the way in individual titles.