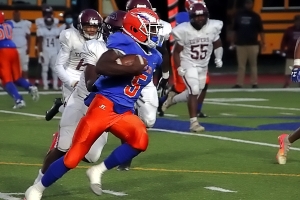 Columbia’s Royce Tolbert (5) scored three times, rushed for 156 yards and two touchdowns and returned a punt 99 yards for a score in Columbia’s 34-6 win over Towers on Friday at Avondale Stadium. (Photo by Mark Brock)

Royce Tolbert scored three times to lead the Columbia Eagles to a 34-6 Region 6-2A victory on Homecoming night at Avondale Stadium on Friday.

Tolbert would finish the night with 156 yards rushing on nine carries, including two touchdowns, and added 165 yards in punt return yardage with a 99-yard return for a score.

The senior running back for the Eagles (4-1, 3-0) opening the scoring on the third play of Columbia’s first possession of the game by taking a pitch around the right end 57 yards into the end zone. Ty’Wann Bryant tacked on the PAT to make it 7-0 with 7:20 to play in the first quarter.

With under 40 seconds to play and backed up at their own 14 a bad snap by the Titans led to Columbia’s Preseason All-State defensive end Marquez Harris sacking Towers quarterback Isaiah Logan in the end zone for the safety for a 9-0 lead with 26 seconds left in the opening period. It was Harris’ second safety in the past two games. 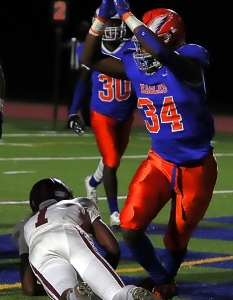 Towers defense held Columbia following the free kick to force a punt. The titans got a 31-yard pass from Logan to Elijah Hobson down to the Columbia 31. Three holding calls later the Titans had to punt on fourth and 34.

Logan’s punt hit and bounced at the 10 and was rolling towards the end zone when Tolbert scooped it up at the one. He slipped a tackle at the goal line and escaped two more as he crossed the 10 on the way to a 99-yard punt return for the touchdown. A two-point pass was no good and the Eagles were up 15-0 with 5:49 left in the first half.

Columbia took the 15-0 lead into the half and received the kickoff to open the third quarter. The second play of the possession was a second down and three at the Eagles own 25 when Royce again escaped around the right side and out-raced the Towers defenders 75 yards into the end zone. Bryant was good on the PAT to make 22-0 just 53 seconds into the second half.

Two possessions later Towers was caught for holding again and along with sacks by Harris and Montarious Dozier forced another punt returned 13 yards by Tolbert to give the Eagles the football at their own 48.

Facing a second and 12 following a holding penalty and an illegal procedure call, quarterback Elijah Morgan dropped back and threw down the left sideline where receiver Jaden Baugh leaped above the defender to catch the ball and then shook him loose at the 20 on the way to a 54-yard touchdown pass play. The PAT was no good and the Eagles were up 28-0 with 1:16 left in the third quarter. 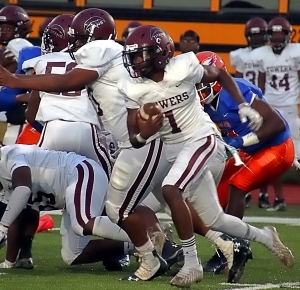 Towers’ Isaiah Logan (1) runs towards the left end against Columbia. Logan had a touchdown pass in the loss to the Eagles. (Photo by Mark Brock)

Towers defender Demetress Broughton came up with a sack on fourth down to put the Titans in good field position at the Columbia 39 with 6:12 to play in the game. Following a timeout, Logan tossed over the middle to Keshawn Weathers who took it the distance to put Towers on the scoreboard. A two-point pass went incomplete to make it a 28-6 game with 6:02 to play.

An onside kick attempt by the Titans was recovered at their own 39 by the Eagles. Four plays later Morgan connected in the corner of the end zone with Baugh on a 15-yard scoring toss with 4:03 left to make it 34-6. Roland Edwin finished with 96 yards on 11 carries and Morgan threw for 106 yards and two touchdowns. Jaden Baugh had two receptions for 69 yards and two TDs.

Stephenson 20, Arabia Mountain 10
The No. 8 ranked Stephenson Jaguars rallied from a 10-0 first-quarter deficit with 14 points in the final two minutes to upend upset-minded Arabia Mountain Rams 20-10 at Hallford Stadium on Friday night in the Region 6-4A opener for both teams.

Arabia Mountain had returned the opening kickoff to the Stephenson one-yard line and punched it in to go up 7-0 early. The Rams then made a stop on fourth and one near midfield and converted it into a field goal by Andre Teague to make it 10-0 heading into the second quarter.

The Jaguars cut the gap to 10-6 as a Marte Barton pass to Jeremiah Aubert went 20 yards down to the Rams one-yard line. Cheik Keita cashed it in on a one-yard run. The PAT was no good and the teams ended up at the half with the Rams holding the 10-6 advantage.

The third quarter went scoreless as neither team was able to mount a scoring drive. The Jaguars still found themselves down by four as the game clock ticked under three-minutes to play when Barton connected with Ethan Patterson on a 16-yard pass to the Rams six-yard line.

The Jaguars were stopped on their first three tries from the five and had to go for it on fourth and goal at the five. Keita got into the end zone and added the two-point conversion to give the Jaguars their first lead of the game at 14-10 with two minutes to play.

Arabia moved to midfield when an errant pass with 30 seconds to play was picked off by the Jaguars’ Samauri Sutton who raced 60-yards for the pick-six to seal the Jaguars’ 20-10 victory.

Cedar Grove 17, Carver-Atl 0
The No. 1 ranked Cedar Grove Saints traveled to Lakewood Stadium for a 5:30 game with Region 5-3A foe Carver of Atlanta and came away with a hard-fought 17-0 win on Friday.

The shutout was the second consecutive for the Saints defense in game that was tied 0-0 at the half.

Rashon Dubinion ran in a touchdown from five yards out later in the quarter and Forte tacked on the PAT to make it 10-0 heading into the fourth quarter.

Carlton Madden sealed the game with a 30-yard pick-six return in the fourth period. Forte added the PAT for the final of 17-0.