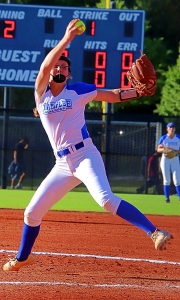 Chamblee’s Margaret Axelson struck out 10 Northview batters and got her 300th career strikeout in Chamblee’s 11-0 win on Senior Night. (Photo by Mark Brock)

Senior Margaret Axelson celebrated Senior Day for the Chamblee Lady Bulldogs softball team by picking up her 300th career strikeout amidst striking out 10 Northview Titans in an 11-0 Region 5-5A victory on Thursday night at Chamblee.

The first Northview batter of the game went down on strikes from the arm of Axelson and she would go on to set down nine consecutive batters, seven by strikeout in three perfect innings on the mound.

Meanwhile the offense put seven runs on the board including a 1-0 lead in the first inning as Axelson reached on an error and scored on a RBI single right by Shea Parker.

Northview went down in order by strikeout in the top of the second inning and the Lady Bulldogs struck for six runs in the bottom of the sixth.

Parker Smith got the scoring started with a bunt down the third baseline to score Rachel Runsick. Savannah Russell had a sacrifice bunt to move runners to second and third with one out in the inning. Seniors Lydia Davis and Emily Katz got in on the Senior Day fun driving in a run apiece followed by a two-run double over the third base bag by Axelson as the lead grew to 6-0.

Kate Sarago lofted a sacrifice fly to score Axelson and send the Bulldogs to the third inning up 7-0.

Axelson set down three consecutive Titans by strikeout in the third with the final one giving her 300 career strikeouts.

Following a scoreless third inning by both teams, Northview’s Kelsea Moody broke up Axelson’s perfect game to that point with a triple off the fence. Axelson go the next 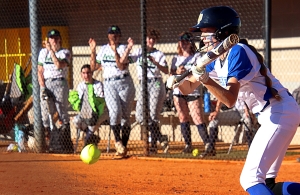 Chamblee’s Parker Smith laid down a perfect bunt towards third base to score a run in six-run second inning by Chamblee. (Photo by Mark Brock)

batter to pop up on the infield for the first out and keeping Moody at third.

A come-backer to the mound was fielded by Axelson and she got Moody in a run down between third and home for the second out. A soft liner by next batter was caught by first baseman Lily McCord to end the only real threat Northview had in the game.

An error and RBI singles to center by Sarago and Runsick led to four more runs by the Bulldogs to make it an 11-0 game heading to the top of the fifth.

Axelson closed out the game with her third inning of striking out the Titans in order to end the game by the run rule. She finished allowing just two baserunners, no walks, one hit and collected 10 strikeouts.