Jaguars Give Jelks First Win at Stephenson 17-6 over Lithonia 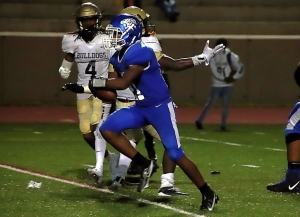 Stephenson running back Cheik Kita (21) slips into the end zone untouched for the game clinching touchdown with just over two minutes to play. (Photo by Mark Brock)

Opening games of the season can be rough especially for teams with new head coaches and the Stephenson Jaguars 17-6 victory over the Lithonia Bulldogs at Hallford Stadium on Friday night turned into a defensive struggle as the two teams are in a learning curve with new head coaches.

Stephenson alum Marcus Jelks replaced his former coach and long-time Stephenson Jaguar football coach Ron Gartrell picked up his first win as the Jaguar head man as Cheik Kita’s five-yard touchdown run with 50 seconds to play sealed the win. Kita tacked on the two-point conversion for the final of 17-6.

The game which featured 31 negative plays from the line of scrimmage and numerous penalties and turnovers featured some big defensive stands in the waning moments.

The Bulldogs set up their final possession by forcing the Jaguars to turn the ball over on downs at the Bulldog seven on a big defensive play by Styland Scott and Randy Harling who combined to stop Rahim Diarrassouba for a three-yard loss on fourth and goal from the Bulldog four.

The Jaguars had put together the longest drive of the night marching 65 yards before the Bulldog defense held.

Lithonia was facing fourth and 11 at its six-yard line with just over a minute to play trailing 9-6 to the Jaguars. Stephenson stopped a screen pass for a one-yard loss to set up Kita’s game-clinching touchdown.

Lithonia under new head coach Kevin Hill forced Stephenson to punt early in the fourth quarter and the punt hit a Stephenson player in the helmet as he was coving on the play to give Lithonia the ball at the Jaguar 37. 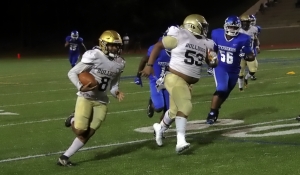 Lithonia’s Darius Sanders (8) uses hit blocker Javier Tennell (53) to get loose on a 37-yard screen pass for a touchdown. The score was called back on a holding call. (Photo by Mark Brock)

The Bulldogs trailing 9-6 appeared to take the lead on the first following the punt as quarterback Monte Harden threw a screen to Darius Sanders who turned up field raced 37 yards into the end zone. Unfortunately, a penalty flag was laying back up field and a holding call nullified the apparent go-ahead touchdown.

Stephenson ended up forcing a punt before beginning their long drive milked close to six minutes off the clock.

Lithonia grabbed the early lead with 8:28 left in the first quarter as a bad snap on a Jaguars punt attempt sailed over the punter’s head and towards the end zone. KeyShawn McCoy tracked down the loose football and went the final 15 yards for the opening score of the game. Lithonia’ two-point try was no good.

Four minutes later Christopher Williams got Stephenson on the scoreboard by tackling Harden in the end zone for a safety to cut the lead to 6-2. Stephenson got the ball with 1:38 left in the first period at the Lithonia 31. It took just three plays to score set up by a nice leaping catch down the right sideline by Rahim Diarrassouba for a 26-yard gain to the Lithonia five-yard line. 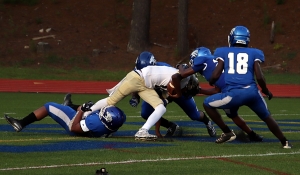 Stephenson’s Christopher Williams on ground had a good grip on Lithonia quarterback Monte Harden as he tackled him for a safety with help from friends. (Photo by Mark Brock)

Two plays later Devin Ingram scored on a two-yard run and Etsomefa Elavewo tacked on the PAT for a 9-6 Jaguar lead with 41 seconds left in the first quarter.

A big defensive play by a Lithonia defender who did not give up a on play when Stephenson’s Kita broke away down the left sideline headed to the end zone kept the Bulldogs with 9-6 at the half. Kita was just about a yard away from the end zone when the Bulldog defender reached out and knocked the football loose. The ball bounced into and our of the end zone for a touchback.

Lakeside 21, Berkmar 12
Lakeside’s AJ Hollman had a big first half to propel the Vikings to a 21-12 win over the Berkmar Patriots at Adams Stadium on Friday night.

Hollman ran for a 57-yard touchdown and then took a pass 57 yards to the house as the Vikings jumped out to an early 14-0 lead. Berkmar cut the lead to 14-7 when Hollman struck again.

The sophomore athlete took the ensuing kickoff 90 yards for a touchdown and the Vikings took a 21-10 lead into the half.

In other wins by first-year coaches Arabia Mountain’s Julian Washington opened his tenure with a 21-6 win over Rockdale County while Miller Grove’s Melvin Brown picked up his first win 24-7 over Walnut Grove. Both wins came on the road.