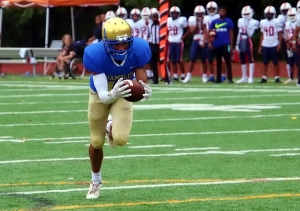 Chamblee’s Connor Pressnall scoops up a blocked punt and returns it 10 yards for a touchdown against North Springs in the Bulldogs’ 59-21 victory on Thursday at North DeKalb Stadium. (Photo by Mark Brock)

Scoring in all phases of the game the Chamblee Bulldogs scored 59 consecutive points on the way to a 59-21 victory over the North Springs Spartans in the season opener at North DeKalb Stadium on Thursday night.

The Bulldogs (1-0) took the football on the opening drive going 55 yards in nine plays to take the quick lead. The drive was keyed by a 20-yard scramble by quarterback Fabian Walker. Curtis McCorvey finished off the drive with a four-yard run around the right side with 9:21 to play in the opening period. Will Burton connected on the PAT to make it 7-0.

North Springs (0-1) was forced to punt on its opening drive, but the Bulldogs to a special teams score as Connor Pressnall and a teammate combined to block the punt. Pressnall chased down the bouncing ball, collected it at the 10-yard and raced into the end zone with 6:20 left in the first quarter. Burton was again good on the PAT to make it 14-0.

A personal foul on North Springs next punt gave the Bulldogs the ball at the Spartan 35. Four plays late Jameel Avery scooted in from one-yard out. Burton tacked on the PAT for a 21-0 lead with 2:18 remaining in the first quarter.

North Springs went for it on a fourth and four at its own 26 and quarterback Zavier Davis was dropped for a three-yard loss as he tried to escape the Bulldog pressure.

Chamblee failed to convert a first down and Burton came on to hit a 39-yard field goal to push the lead to 24-0 with 10:34 left I the first half.

The Bulldogs to a turnover on the next Spartan possession recovering at the North Springs 26. Fabian Walker and Jordan Thornton combined on two passing passes to go with a personal foul on the Spartans to get into the end zone again. Walker hit Thornton on a swing pass that covered six yards for the score. Burton hit his fourth PAT of the game to make it a 31-0 advantage for the Bulldogs with 9:19 left in the first half.

Chamblee’s defense forced another punt by the Spartans and two plays later Walker connected down the seam with Avery for a 41-yard touchdown pass play at the 5:37 mark of the second quarter. Burton made it five consecutive PATS for a 38-0 Bulldog lead. 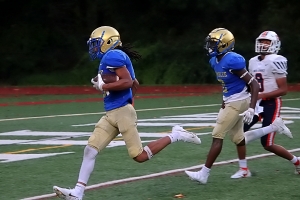 Chamblee’s Sydyk Ross crosses the goal line on a 15-yard fumble return for a touchdown. It was the first of two defensive scores by the Bulldog who also returned an interception 35 yards. (Photo by Mark Brock)

Sydyk Ross got into the scoring the first of his two defensive touchdowns scooping up a Spartan fumble at the North Springs 15 and racing into the end zone. Burton connected on his sixth PAT to extend the lead to 45-0 just 20 seconds after the last Bulldog score.

Pressnall set up the final score of the first half with a 52-yard interception return to the North Springs eight-yard line. Three plays later Thornton got his second touchdown of the half. Burton put his seventh PAT through the uprights to make it 52-0 with 2:29 left in the half.

North Springs completed a 28-yard pass to the Bulldogs’ eight-yard line with 1.4 seconds left in the half, but could not get a play off to head into the locker room down 52-0.

Ross ruined North Springs’ opening drive of the second half stepping in front of a pass to pick it off and race 35 yards down the right sideline for a touchdown. Burton made it a perfect 8-8 on the PATS to put Chamblee up 59-0 with 7:48 left in the third quarter.

North Springs quarterback Zavier Davis threw for 125 yards and three touchdowns the rest of the way to help North Springs cut the lead against the Chamblee backups.

Davis connected with Anthony Young (6 yards) for one touchdown and twice with Jarquis Williams (26 and 31 yards) as the Spartans closed the gap to 59-21 to end the game.

Chamblee extended its win streak dating back to October of last year (24-16 over North Springs) to four games. The Bulldogs travel to Lumpkin County next Friday.