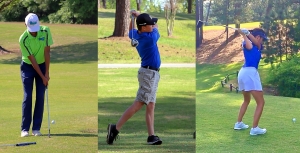 Arabia Mountain sophomore Isaiah Fleming made the Class 4A Boys State Tournament held at the University of Georgia Golf Course in Athens with a qualifying finish of 15 in the Area 2-4A Golf Tournament with a day’s total of 90.

Fleming shot better both rounds of the state tournament than he did in the Area 2-4A Tournament opening with an 89 on the first day. He followed it up by cutting three-strokes off his first round to shoot an 86 on the second day to finish with a 175. Fleming came in 54th overall out of 78 participants in the tough Class 4A State Tournament.

Chamblee junior Ethan Santucci competed in the Class 5A Boys State Tournament held at Green Island County Club in Columbus after qualifying as a top individual out of the Area 3-5A Boys Tournament. Santucci shot a 78 to finish fifth overall at area.

He took that into his first state tournament appearance to finish in a tie for 39th out of 78 qualifiers. Santucci shot a first round 85 on the opening day of the tournament. He bounced back three strokes better with an 82 to cart a 167 total.

In girls’ Class 5A play, Chamblee sophomore Sophie Li got her first taste of state tournament play after qualifying as a top individual out of Area 3-5A with a 98 to finish eighth overall.

Li opened the tournament with a first round 104 at Green Island, but slipped a bit with a second round 110 to finish at 214. The 214 total put her at 43rd out of 53 state qualifiers to make the tournament.