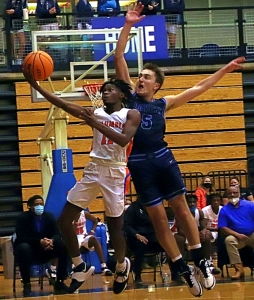 Columbia’s Kawasiki Ricks (11) has been the big play guy for the Eagles in their three road playoff wins. He hit his second consecutive game-winning shot to lift the Eagles to a 49-47 Class 2A quarterfinal victory over Washington County on Wednesday night in Sandersville. (Photo by Mark Brock)

For the second time in three state playoff games Kawasiki Ricks was cold blooded with the ball in his hands hitting a shot at the buzzer to propel the No. 4 ranked Columbia Eagles to a 49-47 victory over the hosts No. 7 Washington County Golden Hawk on Wednesday night.

Ricks took the inbounds pass staring down a clock with 3.9 seconds remaining and almost a full court to navigate. He took off down the court, passed his defender above the top of the key, lofted a shot before the buzzer that kissed the glass and found its way into the net for the 49-47 win.

The senior playmaking guard has been dangerous in all three road playoff victories as they came down to the wire. He began by hitting eight of eight free throws down the stretch in the 74-67 opening round win over No. 10 Chattooga and followed up with a layup with under 10 seconds to play in the 57-56 victory over Callaway last Saturday night.

Washington County got out to an early 17-8 lead in the first quarter behind nine points from Jairus Brown and a pair of treys from Kejuan Bloodsaw.

Columbia (20-6) closed the gap to 26-24 at the half behind Julius Coleman’s three treys Rashard Headges three and four points by Julius Lymon.

Coleman and Headges both hit threes in the third period and Lymon knocked down four more points to give the Eagles a 37-36 lead heading into the fourth quarter.

Mason Lockhart hit for eight fourth quarter points to help set up Ricks game-winning play with the game tied at 47.

Julius Coleman finished with a game high 20 points (4 treys and 4 points in the fourth quarter) and was joined in double figures by Lockhart with 12 points. Ricks’ game-winning basket was his only made field goal of the night to go with one free throw.

The top three seeds from Region 6-2A are in the semifinals led by No. 1 ranked Pace Academy (26-1), No. 3 ranked Lovett (20-7) and the No. 4 ranked Eagles (20-6). The Eagles and Lovett collide for the third time this season on Saturday at Lovett with game-time set for 6:00 pm. Columbia won the regular season game 64-59 but fell in the 6-2A semifinals to the Lions as the two teams split their first two meetings.

Pace goes on the road to Thomasville to take on the No. 6 ranked Bulldogs (18-1) to decide the other championship entry.