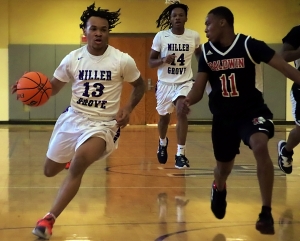 William Freeman hit four free throws in the final 19.4 seconds to help No. 1 ranked Baldwin seal a 58-52 win over the hosts and No. 3 ranked Miller Grove Wolverines on Wednesday night.

Baldwin took the lead with 1:30 to play in the first quarter on a three-point play by Shatavious Hogan to make it 11-8 heading into the second quarter.

The lead expanded to 25-16 at the half as Freeman made a steal and sank a three-pointer at the buzzer. Freeman gave Baldwin its biggest lead of the game with a three-pointer to make it 38-23 with 3:20 to go in the third quarter.

Miller Grove (15-6) struggled once again from the field going 13 of 37 in the first three quarters after going 3-20 in the first half of their win over Luella last Saturday found a 44-33 hole headed into the fourth quarter despite hitting four shots in the final 2:44 of the third quarter.

Tyreik Boyd’s drive and Jamarcus Glover’s offensive put back to start the fourth quarter gave the Wolverines some momentum. Kyair Greene followed with a turnaround jumper to pull his team within 44-39 with 5:40 to play.

Greene would score 13 points in the fourth quarter alone including the Wolverines’ next 11. His two free throws with 1:19 to play made it a one-point trailing 51-50.

Jacobi Nixon’s pull up jumper from inside the top of the key gave Baldwin a 53-50 cushion with 52 seconds to go in the game.

Miller Grove missed two shots on their end and Hogan was fouled on Baldwin’s end and went to the free-throw line for two shots as the Wolverines were over the limit. Both shots were no good and Miller Grove rebounded the ball, but a miscommunication led to the ball being thrown out of bounds under the basket.

Satcher hit the backend of a two-shot foul to lock the win with 12.8 seconds remaining with Baldwin up 56-52.

Boyd drove to the rim again and his shot was blocked. Baldwin (15-0) got the ball back and Freeman was fouled once again with 4.9 seconds to play. He sank both free throws to close out the 58-52 victory.

Zyair Greene completed his career with a 20-point night and has over 1,300 career points. Tyreik Boyd finished with 15 points for Miller Grove to join Greene in double figures.