Redan’s Second Half Rally Falls Short Against No. 6 Ranked Westminster 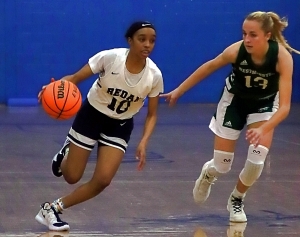 Stumbling out of the block on Senior Night against the No. 6 ranked Westminster Lady Wildcats was tough to overcome for the Redan Lady Raiders as their furious second half rally came up short in a 43-38 Region 5-3A loss at home on Friday night.

Redan had opened some eyes to start the season as the young squad got out to an 8-1 beginning to the season before two Covid-19 quarantines disrupted its momentum as they fell to 9-5 overall and 4-5 in region play.

Trailing by 14 (35-21) for the second time in the game with 2:15 to play in the third quarter Jayla Cook (6 points) and McKenzie (4 points) put together a 10-2 run to narrow the gap to 37-31 as the quarter came to an end. McKenzie’s pull up along the baseline with 21 seconds to play in the period put Redan within six points.

Westminster responded with a 6-0 run to open the fourth quarter kicked started by Kiera Staude’s layup. Courtney Ogden followed with a pull up following a steal and Evelyn Shores offensive put back extended the lead to 43-31 with six minutes to play.

Redan turned up the head on defense forcing seven turnovers and holding Westminster scoreless for the rest of the game while trying to pull back even.

McKenzie completed a three-point with 4:20 to play to make it 43-34, but both teams went the next three minutes without any points. Cook finally got Redan in scoring column again by hitting one of two free throws with 1:18 to play before getting called for her fifth foul and leaving the game.

A couple of turnovers by Westminster led to a McKenzie three-pointer to trim the deficit to the final margin of 43-38 with 23 seconds to play. Redan got the ball back one last time following a Westminster turnover with 8.2 seconds to play but could not score.

Westminster jumped out to an 8-0 lead early as Redan committed nine turnovers and only got off two shots in the first 5:39 of the game.

Loyaltee McKenzie completed a three-point play to get the Lady Raiders on the scoreboard and her drive to the basket with under a minute play helped her team pull within 13-6 heading into the second quarter.

Cook drove the lane early in the second period and Kennedy Daniels hit one of two at the free-throw line to cut into the Westminster lead trailing 13-9.

Cook closed the gap to 27-15 with four points in the final 12 seconds of the half to give the Raiders some momentum heading into the half. 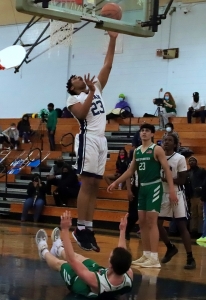 Redan’s Shelek Levi (23) lays in a basket during second half action of the Raiders 55-42 loss on Friday. (Photo by Mark Brock)

(B) Westminster 55, Redan 42
A strong fourth quarter by the Westminster Wildcats spurred them to a 55-42 Region 5-3A boys’ victory over the Redan Raiders in the second game on Friday night.

Elijah Marsh opened the fourth quarter with an offensive put back and a free throw for an old fashioned three-point play to pull the Raiders within 38-34 with 6:39 to play.

Jason Longere answered just 14 seconds later with a long three-pointer from above the top of the key and two free throws to put Westminster up by nine (43-34).

Justin Whitening’s steal and layup with 3:33 seemingly gave the Raiders some momentum down 45-38 only to have Westminster’s Bryce Mackson drain a three-pointer from the right wing to put the lead back in double figures at 48-38 with 2:38 to play.

Longere scored a game-high 27 points to lead Westminster and Bryce Mackson added 12 points and 6 rebounds. Cope Smith pulled down 11 boards to go with six points in the game.