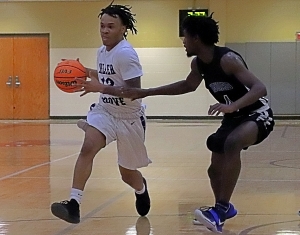 A 13-0 run in the first quarter proved to be the deciding factor in the 64-51 Miller Grove Wolverines victory over the Stephenson Jaguars in the Region 6-4A boys’ championship game at Miller Grove on Thursday night.

It was the second meeting of the two Class 4A Top 10 ranked teams in just over a week and the game was tied 7-7 on a layup by No. 6 ranked Stephenson’s Jaylen Peterson with 4:45 left in the first quarter.

The No. 3 ranked Wolverines (14-4) used tough defense to force five turnovers to fuel a 13-0 run to finish the quarter up 20-7. Back-to-back three-pointers by Kyair Greene and Monqua Owens put Miller Grove up 14-7 with 2:32 left in the period.

Two consecutive turnovers by Stephenson resulted in layups by Greene and Tyreik Boyd with each giving the other an assist on the plays to make it 18-7. Boyd finished off the run with a pull up jumper in the lane at the buzzer to send Miller Grove into the second quarter with the 13-point lead.

Matthew McCullum hit a pair of free throws to open the second period of play and then got free on the baseline on a pass from Jahmil Barber for a layup to make it 24-9 with 6:17 left in the half.

Stephenson’s Jaylen Peterson pulls down one of his 10 rebounds in the Region 6-4A boys’ championship game at Miller Grove. (Photo by Mark Brock)

EJ Walker hit six consecutive points for the Jaguars (11-5) including a three-pointer as Stephenson closed the gap to 26-16 with 3:41 remaining. A Chase Ballard three and a layup by Shaun McKenzie on a Ballard assist cut the lead to six (29-23) with 43 seconds to play in the first half.

McCullum got an offensive put back in the waning seconds to give the Wolverines a 31-23 halftime advantage.

Walker completed a three-point play and drove the baseline for a basket to cut the Miller Grove lead to 38-32 with 3:35 to play in the third quarter, but the Jaguars went scoreless the rest of the quarter. Meanwhile Boyd hit three of four free throws and Owens hit another three to give Miller Grove a 12-point cushion of 44-32 with one quarter left.

Stephenson cut the lead to seven twice in the fourth quarter on big three-pointers by Caleb Parker with 5:59 left to cut it to 49-42 and with 1:41 remaining Walker sank another three to make it a 48-55 deficit.

Boyd would drive to the basket and add two free throws to extend the lead to 10 points (59-49) and Greene sealed the game hitting five of six at the free-throw line down the stretch to close out the 64-51 championship win.

Boyd led the way for the Wolverines with 18 points and 6 rebounds and Greene added 17 points.

Region 6-4A Girls
Three DeKalb teams were playing for playoff seedings on Thursday night including No. 7 Arabia Mountain at No. 3 Marist in the girls’ championship game.

The consolation game of the girls’ tournament pitted the Druid Hills Red Devils and Stephenson Jaguars at Stephenson to determine the third and fourth seeds heading into the state playoffs.

Druid Hills (11-14) went on the road and came away with a thrilling 63-61 overtime victory against Stephenson (6-12) to earn the No. 3 seed. Kyia Craft and Kaitlyn Robinson both scored 19 points to lead Druid Hills and added 9 and 7 assists, respectively. Karmen Frazier contributed a 12-point, 15-rebound double-double.