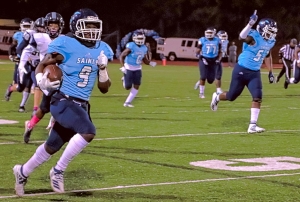 Cedar Grove’s Jordan Grier (9) returns a fumble 70 yards in the first half of the Saints 40-10 win over Pace in 2019. Grier signed with Indiana University. (Photo by Mark Brock)

Despite the Covid-19 recruiting restrictions and scholarships on hold due to the NCAA transfer portal 43 DeKalb senior high school football players signed the dotted line in the 2021 college football signing cycle (December/February).

This number could increase in the coming weeks as things clear up for colleges as they get a handle on scholarship limits for 2021. Currently 17 states and the District of Columbia are represented as destinations for the signees.

State playoff quarterfinalist Cedar Grove led the way with 11 signees that were part of two Class 3A state championship teams in 2018-19. 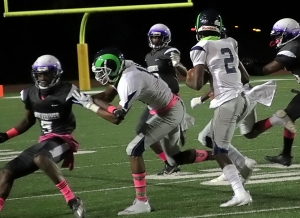 Chamblee quarterback Finn Allers and Miller Grove linebacker Stephen Bacon are headed to the Windy City’s Concordia University in Chicago. Bacon was one of five Wolverines to ink including Daveon Williams (DB, William Penn) who is headed to Iowa. Other college signees from Miller Grove included defensive end Jamil Robert and H-back Kehavi Jackson who both stayed in state at Point University.

Southwest DeKalb had four signees led by teammates linebacker Tory Jones and defensive back Robert Grady both signing with the University of Cumberlands to continue their careers together. Linebacker Anthony Lovett (Missouri Valley College) and defensive end Caleb Grant (Wheeling University) are moving on with their choices for the next four years. 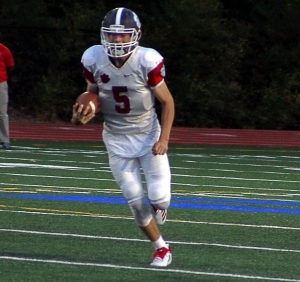 Dunwoody’s DAvis Ledoyen is the No. 6 All-Time passing leader in DeKalb with 5,147 yards. He is taking his talents to Elon. (Photo by Mark Brock)

Stephenson had All-State offensive lineman George Jackson (Louisiana) and defensive back Dorian Helm (UMass) sign up for the next four years.

One of the top passers in DeKalb County history Davis Ledoyen of Dunwoody picked up a scholarship from Elon University. Ledoyen finished fifth all-time in DeKalb with 5,147 yards passing.