Southwest DeKalb’s Lauryn Bell drives the baseline during second half action of the Lady Panthers 60-32 win over Decatur at home on Tuesday night. (Photo by Mark Brock)

The No. 5 ranked Southwest DeKalb Lady Panthers outscored the Decatur Lady Bulldogs 49-15 after trailing 17-11 in the second quarter on the way to a 60-32 Region 5-5A girls’ high school basketball victory at home on Tuesday night.

Ryan Evans and Marlo Simms scored four points each for Decatur in an 8-0 run to start the second quarter to take the 17-11 lead.

After the two teams traded two points Southwest DeKalb down 19-13 went on a 15-0 run to take the lead for good. Aniyah Lee who put in eight points in the run tied the game at 19-19 with 1:56 to play in the first half.

Jade Gomary ended the run with a drive to basket for Decatur and after two free throws by Southwest’s Brooklyn Scrubb added two-free throws of her own as the Lady Panthers (15-4, 11-0) took a 30-23 lead into the half.

Adrieanna Brownlee got two baskets on assists by Lauryn Bell and an offensive put back to score six points in a 17-0 run to start the second half as Southwest blew the game open. Decatur was held to 0-6 shooting and had seven turnovers and the only point of the quarter came on a free throw by Gomary with 47.6 seconds left.

Thompson ended the quarter with a three-pointer to give Southwest a 26-point lead 50-24 with one quarter remaining to be played.

Gomary hit a pair of three-pointers that were countered by two from Southwest’s Bell that put a cap on the game.

Aniyah Lee finished with a game-high 16 points to lead Southwest while Brownlee chipped in 10 points and nine rebounds to go with 10 points from Pryia Thompson. 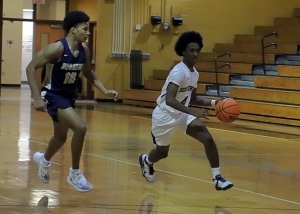 Southwest DeKalb’s Mikel Potter (4) brings the ball up the court past Decatur’s Turner Cummings (15) during the Panthers tough 48-43 loss. (Photo by Mark Brock)

(B) Decatur 48, SW DeKalb 43
The Decatur Bulldogs used a big fourth quarter to pick up a 48-43 win over the Southwest DeKalb Panthers to earn a sweep of the Region 5-5A series this season.

Southwest DeKalb (7-6, 4-5) had rallied from a 24-18 third quarter deficit behind the play of Kourtney Forrest to take a 29-27 lead into the fourth quarter. Forrest scored nine points including a basket with three seconds remaining in the period that put the Panthers up two.

Turner Cummings answered with a three-pointer for a 39-34 advantage for the Bulldogs who would lead by as much as eight (46-38) in the final 1:00.

Southwest cut the lead to four on a three-pointer by Sanders with 19 seconds left. Decatur missed six of nine free throws down the stretch as the Panthers fouling late gave them opportunities, they were not able to convert.

Harrison Hannah led Decatur with 12 points with teammates Hood and Axam adding 10 points each in the game.

Kourtney Forrest had a game-high 17 points to lead the Panthers.