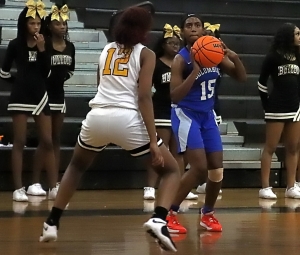 Columbia’s Daija Carr (15) lines up for a three-poionter as Zaryana Mitchell (12) defends. during first half acdtion of Columbia’s double-overtime win in January. (Photo by Mark Brock)

Lakeside High School was chosen as the Atlanta Region Most Positive School while having two athletes named regional winners. Jack Hobbs was the Boys Swimming and Diving winner and Tommy Lazer-Waldman was named the Multi-Sport (Swimming/Tennis) winner.

Arabia Mountain High had one athlete and one coach recognized as Atlanta Regional winners. Joshua Brooks (Track and Field) was noted for his hard work along with cancer survivor Demetris Collins (Cheer Coach).

David Roberson of Southwest DeKalb was the winner for Adapted Sports in the Atlanta Region while Dunwoody’s Albert Rice was the Boy’s Golf winner.

Megan Fletcher of Druid Hills was picked as the Atlanta Region Girls’ Swimming and Diving Positive Athlete and Chamblee’s Solange Jackson picked up the honor for Gymnastics who was also a four-time All-American Cheerleader.

The organization has awarded over $350,000 in scholarships over the past several years in a celebration of Positive Athletes who have overcome difficult circumstances, given back to their schools and communities in a significant way or just have an infectious positive attitude that makes everyone around them a better person. 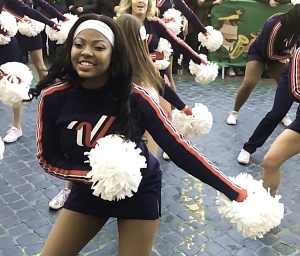 SEVEN DEFINITIONS OF A POSITIVE ATHLETE:
Optimistic Attitude
Most coaches will tell you that an athlete who believes positive things will happen has a greater chance for success.

Puts Team First
There are times when personal achievement may hurt the team’s goal. Positive Athletes choose their team.

Encouraging Teammate
In every sport, teammates are going to experience some kind of failure. Positive Athletes are the first ones to encourage them.

Servant Leader
Positive Athletes do not think about being the “stars of the team.” They lead through serving others first and by setting an example.

Heart for Others
Many athletes are blessed with gifts that many others are not. The Positive Athlete seeks to help the less gifted or fortunate.

Admits Imperfections
This is Positive Athlete…not Perfect Athlete. Athletes willing to admit they make mistakes gain the respect of teammates and fans.

Always Gives 100%
Not every athletic competition goes as planned, but a Positive Athlete always gives 100% no matter what the scoreboard says.