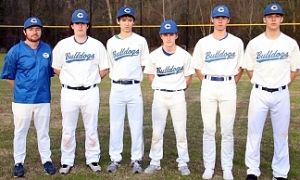 DeKalb County schools only managed to play 26 of the 54 games that were on the schedule. Druid Hills emerged as the only local squad to post a perfect record.

Dunwoody graduate Eric Love registered a victory in his high school debut as a head coach at Druid Hills. The Red Devils rolled to a 12-2 triumph over Whitefield Academy Feb. 15 at home in getting off to a 1-0 start.

Chamblee and Redan escaped with the only other winning records among the 10 DeKalb squads that played at least one game.

Coach Brian Ely’s Chamblee Bulldogs registered victories over Mt. Pisgah Christian (5-2) Feb. 13 and Tucker (8-6) Feb. 15 before dropping a tough 8-7 loss to St. Pius in finishing the week with a 2-1 mark.

Chamblee pounded out eight hits in a heart-breaking 8-7 road loss to St. Pius Feb. 15. Pressnall took center stage on the individual side, finishing 3-4 with two RBI and one run scored. Junior Isaac Harkins went 2-4 with two RBI and one run scored. Sophomore Taylor Flowers shined brightest among three Bulldog pitchers in the contest, striking out two and allowing six hits, two walks and one earned run over four innings.

Redan hit the road to Lake Point for three games, matching Chamblee with a 2-1 start. Coach Alexander Wyche’s Raiders opened with a thrilling 11-8 triumph over Kell Feb. 14, dropped a 3-0 decision to Cambridge Feb. 15 and then easily took care of Starr’s Mill by a 13-3 margin in the second and final game on Feb. 15.

Tucker received strong offensive outings from a pair of sophomores in an 11-4 road defeat at the hands of St. Pius Feb. 15. Barry Manning finished 3-3 with one RBI in the contest, while Noah Grayson went 2-3 with two runs scored.