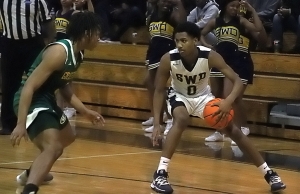 Griffin’s Jamoi Mays (4) tries to keep Southwest DeKalb’s Jacorry Gist from driving to the basket during second half action of the Class 5A boys’ Sweet 16. (Photo by Mark Brock)

Southwest DeKalb was the first of three DeKalb boys’ basketball teams to advance to next weeks GHSA State Tournament quarterfinals with wins on Thursday as the Panthers eliminated Griffin 67-46 at Southwest DeKalb.

Jacorry Gist’s offensive put-back with eight seconds to go in the first half ended a 6-0 run by the Panthers (18-12) to open a nine-point lea of 31-22 at the half. Gist made an earlier layup in the run off a steal and assist by Eugene Brown III started the run with a drive to the basket for his 13th point of the game with 1:31 left in the first half.

Griffin would get no closer than eight (34-26) the rest of the game. Quay Baker hit a pair of free throws and Jamoi Mays knocked down a pull-up jumper with 4:09 left in the third quarter to pull Griffin closer.

The pair of Brown and Gist teamed up with Muhamed Diallo on an 8-1 run to end the third quarter to extend the lead to 42-27 with just eight minutes to go in the game. Diallo started the run with a layup followed by Gist on an assist from Jarrett Walton. Brown added a drive for a layup and then two free throws.

Brown added two big dunks in the fourth quarter before subbing out and Kortney Forrest had a flurry of eight points in the final 38 seconds of the game as the lead grew to 21.

Southwest DeKalb will entertain Clarke Central (19-8), a 55-50 upset winner on the road over No. 1 Eagles’ Landing, in the quarterfinals next week.

Lithonia got off to a slow start in the game trailing 11-2 early. They would outscore 34-17 the rest of the half to take a 36-28 advantage into the half. Veterans edged closer down 50-44 as the third quarter came to a close.

Veterans trailed by eleven (56-45) with five minutes to play before pulling within 70-64 with 1:15 to play. Lithonia was able to put up eight more points to pick up the 10-point victory. 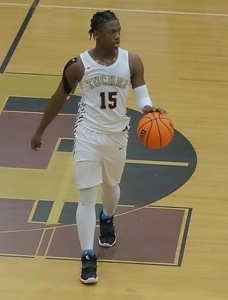 Tucker guard Raylon Barrion brings the ball up the court against Allatoona. (Photo by Lester Wright)

Class 6A Boys
The No. 1 ranked Tucker Tigers set up a rematch of their last second state championship loss to Tri-Cities with a 57-43 win over Allatoona on Thursday.

Tucker (26-3) got 28 points from Terrance Edwards and 14 more from Jermontae Hill in the home victory.

The No. 4 ranked Bulldogs (25-5) defeated Houston County79-67 to earn the trip to play at Tucker next week.

In other Class 6A boys’ action, the Stephenson Jaguars pushed No. 3 ranked Lanier (23-5) to limit before having their season come to an end with a heartbreaking 60-58 overtime loss. The Jaguars (18-11) led several times during the game.

Class 3A
The Cedar Grove Saints could not pull off two consecutive road upsets as they dropped their Sweet 16 game 71-57 to No. 8 Johnson-Savannah (21-7) on Thursday. The Saints had knocked off No. 2 Dawson County last week.