DeKalb Teams Knocked Out in First Round of State Playoffs 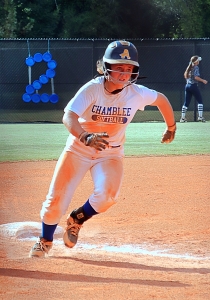 Chamblee’s Savannah Russell rounds third and heads to home to score the Lady Bulldogs’ lone run of a 5-1 loss in Game 2 vs. Woodland. (Photo by Mark Brock)

The first round of the state softball playoffs was not kind to DeKalb County teams as five programs had their season come to an end.

The big story of the two games was Woodland pitcher Lainey Baker who struck out 25 batters while limiting Chamblee two runs over 14 innings.

Baker struck out 14 in the 2-1 opening win while Chamblee’s Lily McCord allowed just two hits in the pitching duel.

Woodland benefitted from two unearned runs as Bella Carnes who led off the top of the fourth with a single in a 0-0 game. McCord got a groundout and a popup to get two outs before two infield errors led to Woodland scoring a pair of unearned runs for a 2-0 lead.

Baker worked out of three Chamblee threats with inning strikeouts including a two-on, two-out situation in the bottom of the sixth.

The Lady Bulldogs got a leadoff single by Grace Brown in the bottom of the seventh before Baker got a strikeout and come-backer to the mound to put Chamblee just one out away from a loss. Savannah Russell came to the plate as Chamblee’s last chance and delivered a hard-hit ball into left center field that scored Brown.

Russell rounded first and headed to second as the throw was bobbled by the Woodland second baseman. She appeared to have beat the tag, but was called out to end the game.

Chamblee opened the second game against Baker with one-out hits by Margaret Axelson and Ansley Mepham. The pair were on second and third when Baker induced a come-backer to the mound and another inning ending strikeout to get out of the jam.

Morgan Cooper got Woodland on the board first with a solo homer and an error led to a sacrifice fly by Brianna Hill to take a 2-0 lead in the second inning.

Chamblee answered as Mepham drilled a RBI double to center to score Russell. Chamblee had two runners on base with two-out and Baker got another big strikeout to end the inning.

Another untimely error by the Lady Bulldogs led to another Woodland run in the bottom of the fourth as a groundout by Bella Carnes that would have ended the inning scored Kailey Baker to make it 3-1.

Mepham doubled and Mary Axelson walked to start the top of the sixth. Rachel Runsick got down a nice sacrifice bunt to move the runners over one base. Baker rebounded with back-to-back strikeouts to end the inning to push her to 11 strikeouts in the game.

Another error opened the door for two more runs for Woodland in the bottom of the sixth with Hill driving in a run with a single and later scoring on a fielder’s choice that allowed her to score before the final out. Woodland took a 5-1 advantage to the top of the seventh and leaving Chamblee with just three outs to keep the game going.

Chamblee had a pair of hard-hit balls tracked down in the outfield to end the game.

Following the 7-1 opening game loss, Arabia Mountain grabbed a 2-1 lead in the top of the fourth with an inside the park homerun and a triple when trailing 1-0 going into their at-bat.

Kell answered with four runs in the bottom of the fourth to go up 5-2. The Lady Rams would leave runners stranded at third three times during the game as Kell closed out the 6-3 win.

Dunwoody went on the road to Alexander in the Class 6A state playoffs, but returned home with a 2-0 series loss as Alexander took 11-0 and 15-1 wins.

In action on Thursday both the Martin Luther King Jr. Lady Lions and Cedar Grove Lady Saints had their seasons come to an end. The Lions fell 10-0 and 9-0 to Brunswick in the Class 6A state playoffs and the Saints dropped 23-0 and 27-0 decisions to East Hall in Class 3A first round play.