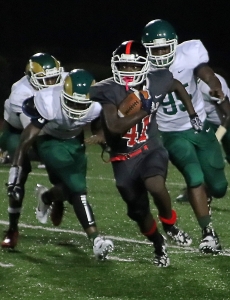 Druid Hills Celeste Birorimana (41) gains yardage on one of his 23 carries against Clarkston in the Red Devils 28-0 win on Friday night. (Photo by Mark Brock)

The Druid Hills Red Devils kicked off the 2019 season with a 28-0 victory over DeKalb rivals Clarkston Angoras at Adams Stadium on Friday night as part of 11 games involving DeKalb County football games over the weekend.

Running back Celeste Birorimana rushed for 130 yards on 23 carries including the opening score of the game. Birorimana struck on a 13-yard TD run with 9:05 left in the first quarter to get the Red Devils on the scoreboard. Shayan Kianpour hit the extra point for a 7-0 lead. The score was set up by a fumble return to the Angoras 18 by Jordan Isaac.

Druid Hills made it 14-0 with 35 seconds left in the first quarter when quarterback Sterling Knowles passed to the right on a screen to Graham Connell who turned up the field and raced past the Angora defenders for a 68-yard scoring play. Kianpour was again good on the PAT.

The second quarter went scoreless and the Red Devils took a 14-0 lead into the half.

Midway through the third quarter Druid Hills began a seven-ply, 50-yard drive to extend the lead to 21-0 with 4:09 to play in the quarter. A 15-yard pass play from Knowles to Max Nunnally helped set up a two-yard touchdown run by Donavon Paul. Kianpour made it 21-0 with his third consecutive PAT. 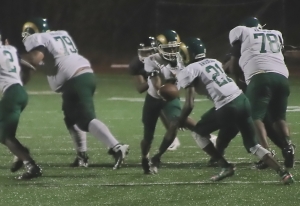 Clarkston put together its best drive of the game later in the quarter following fumbler return to the Red Devils’ 33. Clarkston’s Camari Hunt had runs of 13 and 1 yards as the Angoras faced a third and five at the 15.

Druid Hills forced a fumble and Paul George got his second fumble recovery of the game and raced 83 yards to a touchdown. Kianpour was again good with the PAT for the final of 28-0. 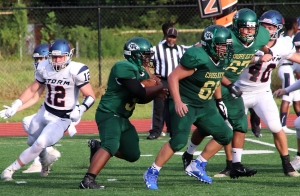 Cross Keys put together a scoring threat in the third quarter driving to the Storm’s 15-yard line. A 22-yard pass from Narvy Bibiano to Victor Corona got the Indians (0-1) into Storm territory. Roy Huff (8 carries, 37 yards) carried the ball to the 15 for a 24-yard gain, but a turnover ended the threat.

Southwest DeKalb 39, Woodland-Stockbridge 7
A big first half helped the Southwest DeKalb Panthers open the season 1-0 with a 39-7 win over the Woodland Wolfpack on Friday at Godfrey Stadium.

Southwest DeKalb went 10-0 in the regular season a year ago and the victory extends the Panthers’ regular season win streak to 12-0 dating back to a November 3, 2017 win over the Columbia Eagles.

The Panthers jumped out to a 26-7 lead at the half as the defense held the Wolfpack to just one score on the night.

Cedar Grove 26, Hapeville Charter 16
The consensus No. 1 ranked and defending Class 3A state champions jumped out to a 13-0 first quarter lead on the way to a 26-16 win over Hapeville Charter Hornets in the Inner-City Classic at Godfrey Stadium on Saturday night.