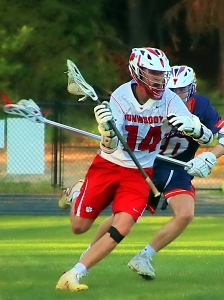 A bit of history was made on Thursday night as the Dunwoody Wildcats lacrosse team knocked off No. 1 seed Harrison in a 12-6 Class 6A/7A state playoffs road win to give the program and DeKalb County its first playoff victory.

Dunwoody was making its third consecutive appearance (2017-2019) in the state playoffs but had bowed out in the opening round the first two seasons before yesterday’s victory.

The two teams were tied 3-3 at the end of the first quarter before Dunwoody would outscore Harrison 9-3 over the final three periods of play.

Dunwoody took a 6-3 lead into the half as sophomore Zach Rosing broke the 3-3 tie with a goal in the second period to give Dunwoody the lead for good. The Wildcats upped the lead to 9-3 by the end of the third period. A 4-2 advantage by the Wildcats in the fourth quarter sealed the 12-6 win and trip to the second round.

Rosing led the way for Dunwoody with three goals and three assists followed by junior Connor Brogdon with two goals and two assists and freshman Noah Fox with a pair of goals and one assist in the game.

Senior Sean Fox and sophomore Conner Reid both put two scores in the net for the Wildcats and freshman Anderson Nail added another goal and won 17 of 21 face offs in the game. Junior Carson Bregitzer and senior Sam Mahle contributed one assist each in the victory. Mahle also contributed picking up 11 ground balls to lead the Wildcats. Senior goalie Blake Hein had four saves in the contest.

Southwest DeKalb (7-6), one of two all-African American girls’ to be the first to make the state playoffs, went on the road to Wesleyan (14-4) and dropped a 22-5 decision on Wednesday.